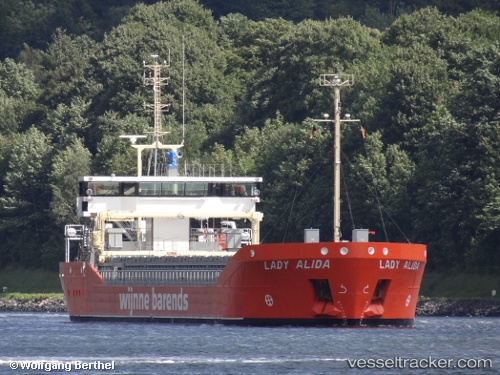 Emergency services were dispatched to the 'Lady Alida' in the morning of Feb 6, 2021, at 9.30 a.m. for a man who fell into a hold of the 'Lady Alida' in the port of Vlaardingen. A cherry picker had to be used to hoist the man from the hold at the berth in the Koningin Wilhelminahaven in Vlaardingen. The fire brigade called a height rescue team and a large number of rescue workers. Te man could be safely recovered and was transported to hospital with presumably a broken leg or ankle. Nothing is known about the circumstances of the accident. Report with photo: https://www.schuttevaer.nl/nieuws/actueel/2021/02/06/hoogwerker-haalt-gewonde-uit-ruim-schip-vlaardingen/

Lifeboat crews have been taking part in a major rescue operation since the early hours of March 20, 2017, after the "Lady Alida" suffered a complete engine failure enroute from Terneuzen to Waterford with a cargo of sand. The Penlee Lifeboat and Sennen RNLI were called to the position three miles south of Gwennap Head, in the parish of St. Levan, to assist the seven crew members onboard. At 3.20 a.m., at the request of HM Coastguard, Falmouth, the all-weather lifeboat "Ivan Ellen" was launched from Newlyn. The lifeboat was alongside the "Lady Alida" just 25 minutes after launching and immediately attached a towing wire. The vessel was towed southwards to safer waters at one knot and was then joined by the Sennen Lifeboat "City of London III" which also attached a tow rope. The initial plan was to tow her to Mount's Bay for a safe anchorage but due to the strong SW wind of six Beaufort it was difficult for the lifeboat to turn the vessel. The HM Coastguard at Falmouth agreed that the Lady Alida could anchor in deeper waters south of Gwennap Head to await the assistance of a tug. The Dutch tug "Alp Centre" (IMO: 9398541) was deployed from Falmouth and expected on site within seven hours. The lifeboat remained on stand-by with a strong likelihood that she would have to relaunch when the tug has arrived on scene. The "Ivan Ellen" was relaunched from Newlyn and was making her way back to the "Lady Alida" after she started dragging her anchor, and the lifeboat was to standby with a tow rope until the tug had arrived around 1.30 p.m. The convoy was heading to Falmouth, ETA March 21. Report with photos: http://www.piratefm.co.uk/news/latest-news/2250197/photos-lifeboats-in-bad-weather-rescue-off-cornwall/