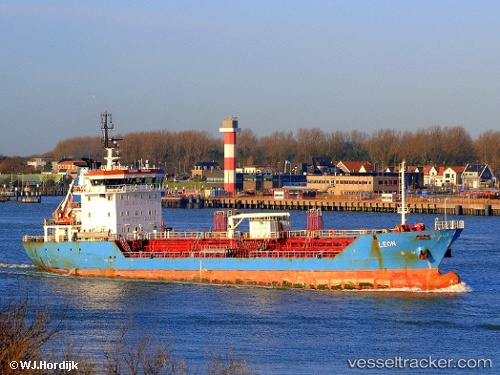 The Russian and Ukrainian crew of the Liberian registered tanker Leon, which has been stuck at anchor outside the Port of Hull since 20th April, finally received their owed wages and fresh food provisions on Wednesday following the intervention of the ITF (International Transport Workers’ Federation). The crew had refused to sail the vessel until the Greek owners, Roswell Tankers Corp of Athens, had paid all outstanding wages owed from January and had provided food and water to replenish exhausted supplies. “The crew had not eaten any fresh food – such as fruit, vegetables, meat, fish, and so on – for a number of weeks and were left with no option but to seek our assistance to have this rectified,” said Nautilus/ITF Inspector Tommy Molloy. Molloy was on board the vessel this week to oversee the arrival of food provisions by tugboat and to verify wages had been paid. Eleven of the crew had originally asked to be repatriated to their homes from Hull. But following yesterday’s developments six of the crew agreed to stay on board until the next port, believed to be Kaliningrad in Russia.

No wages, no food - crew refuses to sail any further

The International Transport Workers’ Federation has been called to assist the crew of the "Leon", which anchored off Hull on Apr 29, 2012. The ITF received calls for assistance when the vessel was alongside but before an inspector could get to the port the ship operator, Roswell Tankers Corp of Athens, Greece, ordered the captain to take it out to anchor to await orders. The crew were complaining that they were owed wages and had no fresh food provisions. The food stores were almost empty. There was flour for baking bread, sugar, butter; some canned fish, which the crew claim has been their staple diet for a number of weeks. There was no sign of fresh food apart from some lemons and some chillies, no fresh or frozen meat, poultry or fish, no vegetables and no fruit. The crew were also worried about the condition of the fresh water tanks, which they had photographed before they were filled in a previous port. There was no bottled water left on board. The crew also complained that they were owed wages since January and that they had each only received USD50 cash on board during that period. The total owed amounted to more than USD 58,000 for eleven of the 15 crew who have requested assistance and who wished to be repatriated from the Port of Hull. One crew member has constant stomach pains, but the company did not repatriate him from either Poland or Hull. The company are putting great pressure on the crew to sail the vessel but the 11 crew members are adamant they do not want to sail the vessel anywhere. The company promised saying there will be food in the next port and they will look into repatriation for those who want it. They also say that since ITF involvement they have arranged payment of some wages into the crew’s home bank accounts. Neither the crew nor the ITF have verification of this, and the majority of the crew is not prepared to sail the vessel any further.