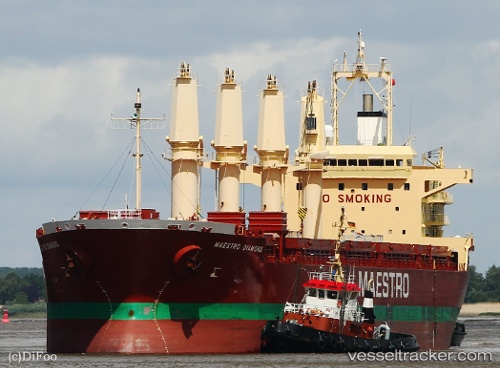 The 'Maestro Diamond' was boarded by five robbers armed with a gun and knives using long ladders, at the Port Au Prince anchorage in position 18 34 06N, 072 24 03W, on July 16, 2021, at 01.30 a.m. The general alarm was sounded, and the crew proceeded into the accommodation block. Upon hearing the alarm and seeing the crew alert, the robbers escaped without stealing anything. The incident was reported to the Port Au Prince authorities.

An accident involving three vessels occurred in the afternoon of Aug 29, 2017, in the Sunda Strait off the port of Merak in northwest Java. Two bulk carriers and one tanker collided, under yet unclear circumstances. All three vessels – besides the "Maestro Diamond" the bulkcarrier "Srikandi Indonesia" and the tanker "Angel No. 1" - were damaged in the collision. The "Maestro Diamond" went adrift in the northern Sunda Strait. The "Srikandi Indonesia" was moored on Merak Anchorage.

On Oct 11 at 1 a.m. the three tugs "Kiel", "Taucher Otto Wulf 5" and "Svitzer Thor" succeeded in refloating the "Maestro Diamond". The salvage attempt started the previous evening around 9 p.m., and it took a few hours of pulling to get the ship off. It was directed to Kalundborg for thorough surveys of the hull by divers, ETA Oct 11, 1 p.m. The "Svitzer Thor" and "Marie Miljø" escorted the bulkcarrier on its way. It was believed to have suffered dents and bumps in the fuel tank area, but no breaches. As a precaution, the fuel had been pumped into more protected tank areas so there was no danger of an oil spill. The ship has left the anchorage off Kalundborg again after the surveys of the hull by divers were completed and resumed the voyage from Klaipeda to New Orleans, ETA Nov 3.