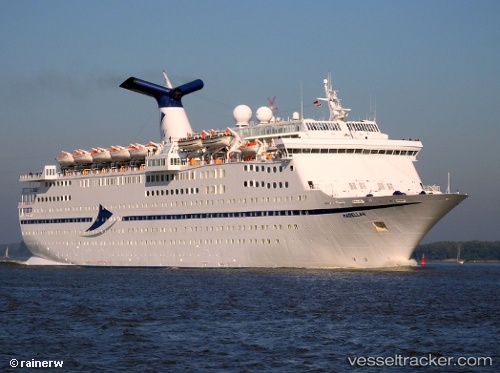 The Norwegian Maritime Authority has fined the Greek cruise ship operator Global Cruise Lines Ltd. a total of $80,000 for using 0.17 percent sulfur fuel in a 0.10 percent sulfur ECA zone. In March, new Norwegian environmental requirements for emissions in several protected fjords - the Nærøyfjord, Aurlandsfjord, Geirangerfjord, Sunnylvsfjord and Tafjord - entered into force. The fine for Global Cruise Lines was the first issued in connection with the new, stricter rules. On April 16, 2019, the NMA received reports about smoke emissions from the "Magellan", which was berthed in Flåm. NMA surveyors boarded the ship when she arrived at Geiranger the next day, and they measured the sulfur content of the ship’s fuel to be 0.17 percent, or 0.07 percentage points above the regional limit. Tracking of the vessel's AIS signal showed that the vessel made ports of call at Eidfjord and Flåm in the days preceding the port of call at Geiranger. Both of these ports are located within the North Sea ECA, where the maximum allowable fuel sulfur content is 0.10 percent. NMA said that the extent of the violation was significant because the "Magellan" sailed a long distance within the emission control area using a fuel with an excessive sulfur content. As an aggravating factor, Norway's new rules concerning the world heritage fjords were violated.

A male passenger on board the "Magellan" was medevaced in the Outer Hebrides after suffering heart problems east of the Island of Barra. The vessel was only on its second day of its nine day voyage of its British Isles Discovery Cruise when the incident occurred. HM Coastguard received a call from the vessel on Aug 28, 2018, around 11 p.m. requesting urgent assistance to transfer the patient to hospital. Stornoway’ s Coastguard SAR helicopter were launched to the scene, transferring the patient to Glasgow’s Queen Elizabeth University Hospital for further treatment. The vessel continued its cruise visiting ports including Portree, Kirkwall, Honfleur in Normandy, Guernsey and the Isles of Scilly before returning to Dublin.

A passenger of the "Magellan" which was about 20 nautical miles north of Barfleur, was medevaced by a Cayman helicopter of the French Navy on Jan 6, 2018. The Cross Jobourg, in liaison with the Maritime Operations Center of the maritime prefecture in Cherbourg, was alerted after the passenger complained of chest pain. A teleconference was organized with the Toulouse Maritime Medical Consultation Center (CCMM) and the SAMU in Le Havre and a medical evacuation was decided. The CROSS alerted the helicopter of the Navy base in Maupertus which took on board a team of the Medical Center of the army of Querqueville and took off at 4.58 p.m. Around 6 p.m., the patient was hoisted aboard the Cayman helicopter of the 33F flotilla and taken to the Pasteur Hospital in Cherbourg.