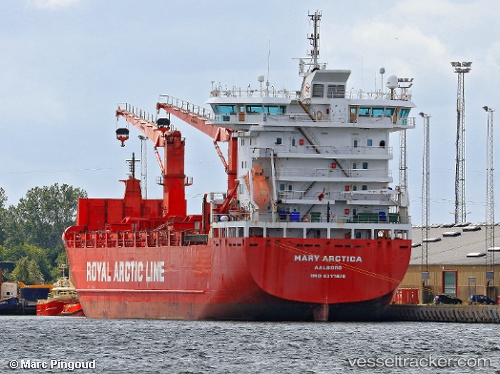 The Danish cargo m/v "Johanna Kristina" , 254 gt (5IMO: 031717), has berthed in Tasiilaq after she hit an ice flow with the propeller, suffering damage to the shaft. The damage has to be repaired, and Royal Arctic Line was currently trying find an alternative solution to get the cargo out to the Arctic communities as soon as possible, as well as the introduction of replacement tonnage for the "Johanna Kristina". Previously the "Mary Arctica" had hit an iceberg in the waters around Nanortalik on June 1 and was taken to Frederikshaven on June 11 for repairs after a spell to Qaqortoq for inspection of the damage. The "Arina Arctica" (IMO: 8131180) will take over the "Mary Arctica"'s sailings. She left the port of Aalborg on June 10 for this purpose. However, as he does not have the same capacity as the "Mary Arctica", it will not be possible to carry all goods, so any goods that have already been booked and submitted will be moved to the next departure. The "MAry Arctica" left the Orskov Yard in Frederikshavn on June 21 at 7.30 p.m. after repairs and headed to Aalborg, ETA June 23, 2 p.m.

After shortly returning to Qaqortoq for inspections of the damage, the "Mary Arctica" was underway to Aalborg and located south of Nanortalik in the morning of June 4. The ship was expected to arrive in Aalborg on june 9. While the "Mary Arctica" is in the yard, the "Arina Arctica" will take over her sailings. As he does not have the same capacity as "Mary Arctica", it will not be possible to carry all goods, so any cargo that has already been booked and submitted will be moved to the next departure. The "Mary Arctica" berthed at the Orskov Yard in Frederikshavn on June 11 at 6.40 a.m. for repairs.