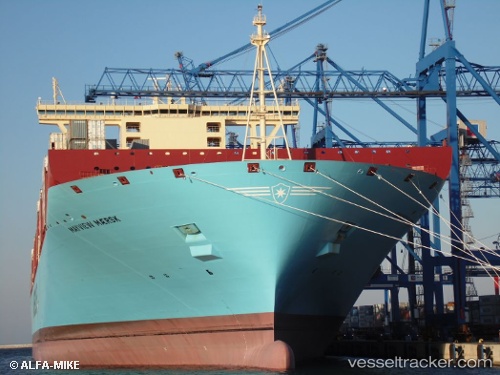 Already on June 27, 2018, the "Mayview Maersk" arrived with some damaged containers on the main deck at the Maasvlakte in Rotterdam. The ship had sailed from Tanjung Pelepas on June 9. On June 29 at 8 a.m. it sailed again, bound to Bremerhaven, where she arrived on June 30 at 3 a.m. Photo: http://www.shipspotting.com/gallery/photo.php?lid=2881117

APM-Maersk has taken delivery of the 18,270-TEU Mayview Maersk, the tenth ship in a 20-ship series that were ordered in Korea from the Daewoo shipyard (DSME) in 2011. The newbuilding will be deployed at the end of July on the carrier's Asia-Europe AE-10 service. The vessel replaces the 15,550-TEU Elly Maersk, which is joining the AE-2 loop that is being gradually upgraded from using ships of 8,400 TEU to 15,000 TEU, reported Alphaliner.