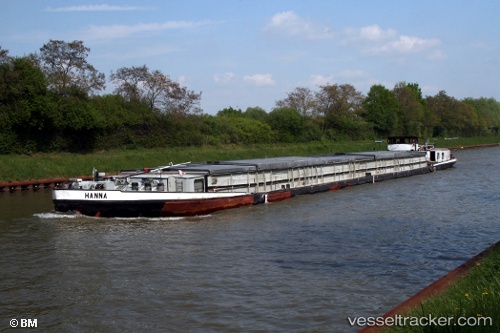 On Feb 22, 2020, at 4.30 a.m. the 'Hanna', 844 ts (EU-No.: 05109340)caught fire in the engine room enroute from Berlin to Peine with a cargo of scrap while transiting the Mittelland Canal. The Polish master alerted the fire brigade in Braunschweig at 4.45 a.m. but could not precisely say where he had berthed his ship, just that it was close to a brige. The fire rescue sent several forces to different bridges in the area, besides the Central Fire Station also the stations in Veltenhof and Rühme were involved. The ship was finally located at the Hansest. in Bruanschweig. The crew was busy fighting the fire. The fire fighters managed to put out the fire within 45 minutes. A generator which could not be turned off complicated the operation. The 'Hanna' suffered severe damage. Pollutants were spilled inside the engine room and mixed up with the foam used to tackle the fire. These remnants have to be properly disposed of now by a specialized company. The 42 fire fighters were stood down two hours after having been alerted. The ship was banned from sailing. German report with photos: https://www.braunschweiger-zeitung.de/braunschweig/article228501753/Binnenschiff-faengt-auf-Mittellandkanal-bei-Braunschweig-Feuer.html

The "Hanna" was refloated in the morning of Sep 11 and taken to a nearby berth. While the ship was lightered of part of its coal cargo, divers were able to patch the leak in the bow with steel plates. The Elbe-Side-Canal was reopened for traffic once the ship was secured.

After the German flagged, self propelled barges "Hanna", 844 ts (EU-No.: 05109340; CS: DD7114; MMSI:211047114) and "Weser", 1358 ts (EU-No.: 04008980; CS: DA9293; MMSI:211508280), were in collision on the Elbe-Side-Canal near the L 232-bridge at Bad Bevensen on Sep 10 at 9.15 a.m., the canal will have to remain closed for shipping until at least the foremidday of Sep 11. Dpozens of ships were queuing. The foreship of the "Hanna" was resting on the bottom, flooded by a leak of 1,5 x 0,4 meters. Before the ship may be salvaged, the 800 tons of coal will have to be lightered. The canal authority in Uelzen has ordered a dredger vessel from Braunschweig for this purpose. The work was due to start in the night. Once the "Hanna" is floating again, she will be taken to an emergency berth in a distance of 1,5 kilometers from the accident site and repaired so far that she may proceed to a yard. Also the "Weser" was holed in the bow, but less serious. Small amounts of spilt oil were recovered by the fire rescue Bad Bevensen. German report with photos, videos: http://www.ndr.de/nachrichten/niedersachsen/lueneburg_heide_unterelbe/Elbe-Seitenkanal-nach-Kollision-gesperrt,schiffskollision182.html https://www.youtube.com/watch?v=TQmfrrY6210 http://www.lzplay.de/videos/2446-havarie-auf-dem-elbeseitenkanal-schiff-hanna-schlaegt-leck?t=2