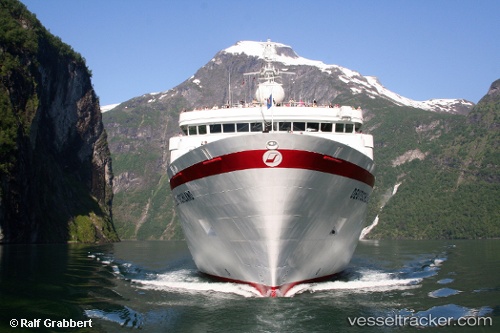 Call at Kirkwall cancelled due to bad weather

The visit to Kirkwall of the "Deutschland", which was due in alongside Hatston Pier on June 14, 2018, has been cancelled due to the weather forecast. Earlier this week OIC Marine Services also gave advance notice that the visit of the cruise ship "AIDAsol" was also cancelled due to the high wind warning.

World cruise of young American ended after one day

On Sep 9, 2017, the lifeboat "Vormann Steffens" of the DGzRS station Hooksiel was alerted to the "Deutschland" which was enroute from Bremerhaven to Barcelona. A 19 year old passenger of American nationality was suffering from panic attacks one day after having set off for a cruise around the world. The helicopter Christoph 26 transferred a doctor and medics aboard the lifeboat which reached the cruise ship one hour later. The patient was taken aboard jointly with a crew member of the "Deutschland". Aobard the lifeboat she recovered so that no further medical treatment was deemed necessary. The lifeboat crew informed the customs about the return of the American woman to Germany, the owners of the cruise ship organized an accomodation, and the mother of the woman boarded an aircraft in the USA to take her daughter back home. German report with photos: https://www.seenotretter.de/aktuelles/seenotfaelle/ansicht/news/seenotretter-in-nord-und-ostsee-im-einsatz/

Deutschland to Phoenix Reisen for 5 years charter starting in 2016

Phoenix Reisen has arranged a five-year charter of the popular 1998-built Deutschland, starting in 2016. The ship is currently sailing for Semester at Sea, and was previously under the Peter Deilmann umbrella. “We are delighted we can bring the Deutschland back to the German market,” said CEO Benjamin Krumpen in a prepared statement. The ship has a loyal passenger base in Germany and fits nicely into the Phoenix fleet, consisting of the Amadea, Artania and Albatros. The Deutschland will go into drydock in spring for various upgrades and also to be painted in the colors of Phoenix Reisen. In addition, French balconies will be installed on Decks 7 and 8. The Deutschland will sail in Northern Europe, with its first cruise to the Norwegian fjords, followed by a sailing to the North Cape and Spitsbergen, and then a 23-day voyage to Greenland. A special brochure for the Deutschland will be released on Nov. 13.