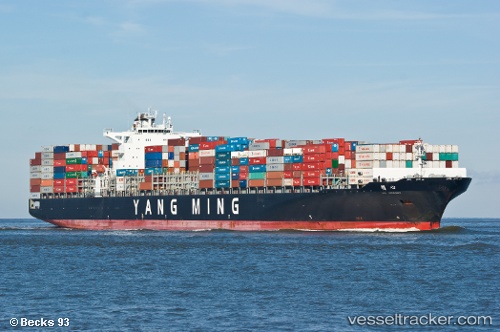 Vessel detained in Rotterdam for investigations

The Dutch authorities detained the "YM Utmost" after its arrival in Rotterdam on Oct 5 short before midnight. Police boarded the ship on request of the German prosecutors and questioned the master. The ship was also inspected by the Dutch authorites before unloading of Containers started. There were hints that the ship, in spite of the captain's statement, in fact had suffered a technical failure while leaving the port of Hamburg causing the development of dense smoke with possibly toxic contents. German reports with photos: http://www.abendblatt.de/hamburg/altona/article132978539/Wie-giftig-war-die-Rauchwolke-ueber-dem-Hafen-wirklich.html http://www.ndr.de/nachrichten/hamburg/Russwolke-hinterhttp://www.shz.de/hamburg/russwolke-ueber-altona-warten-auf-antworten-id7868026.htmllaesst-Fragen-und-Aerger,russwolke106.html

The Police in Hamburg launched an investigation against the "Yang Ming Utmost" after causing an air pollution and a large-scale operation of the fire department upon departure from the port. Since the "Yang Ming Utmost", however, had already picked up speed, a tracking with boats of the river police was no longer possible. The first emergency calls were received on Oct 4 around 7 p.m. from passers-by who were black from the soot. The toxic sulfur cloud drifted over Neumühlen, Oevelgönne and Othmarschen to the hospital Altona where the soot particles were sucked from the air conditioner and fire alarm sounded in the clinic and the fire rescue attended. Whether the toxins came into the emergency room and patient rooms, was not yet known. Restaurant operators in Altona reported considerable amounts soot on furniture, food and beverages. The "Yang Ming Utmost" on its way to Rotterdam apparently had switched from low-sulfur fuel on the cheaper heavy fuel oil already in port. German report with photos and video: http://www.ndr.de/nachrichten/hamburg/Polizei-ermittelt-wegen-Schiffs-Russwolke,russwolke100.html http://www.radiohamburg.de/Nachrichten/Hamburg-aktuell/Panorama/2014/Oktober/Qualmsaeule-und-Fehlalarm-Ermittlungen-zu-Russschiff-im-Hafen http://www.youtube.com/watch?v=M5ywGOB3drM http://www.mopo.de/polizei/sogar-brandmelder-schlugen-alarm-containerschiff-stoesst-stinkende-abgaswolken-ueberm-hamburger-hafen-aus,7730198,28648452.html