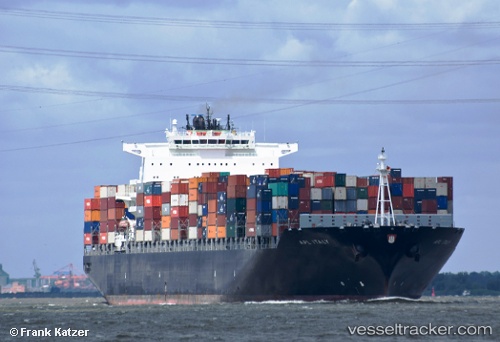 APL, a wholly owned subsidiary of Singapore-based Neptune Orient Lines, has started deploying 8,400-TEU ships on the APL-MOL Far East-Mideast West Asia Express (WAX/CMI) now served by six ships averaging 6,350 TEU each, reports Alphaliner. APL has introduced the 8,411-TEU APL Italy (aka, Northern Javelin) last week and will introduce sister ship APL Portugal (aka, Northern Jasper). Both have been redelivered by MSC and have been secured by APL with two other sister ships, the Northern Jaguar and Northern Juvenile, each expected to join APL in the coming weeks.

Two seamen from the Northern Javelin container vessel were ferried to St George’s by pilot boat in the early hours of Monday. The two sailors, both Burmese, were injured on board the ship. The vessel, travelling from the US to Egypt, changed course and arrived at Five Fathom Hole at 1am on Monday. The men were treated for head injuries. Both were due to fly home on Monday’s BA flight.