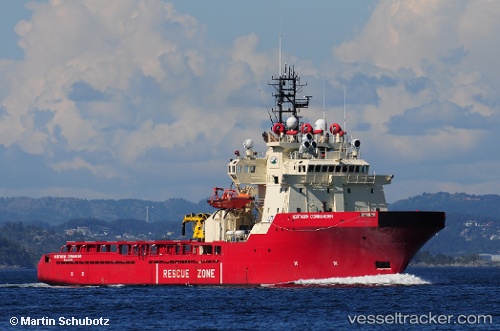 Engine damage under repair in tuzla

The 'Ocean Investigator', which had suffered an engine failure at Ambelaki on March 1, 2021, was towed to Tuzla for permanent repairs on Oct 8. The ship entered the shipyard, upon completion of formalities, where a detailed damage survey was carried out by the class surveyor, along with the superintendent of the vessel owner and shipyard's duty engineer. Repairs have been commenced by shore based technical teams according to the class surveyor's recommendations.

Disabled tug under tow to Tuzla

As repairs of the 'Ocean Investigator', which had suffered an engine failure at Ambelaki on March 1, 2021, could not be carried out by the crew, the anchor handling tug 'Foteini Z' (IMO: 9593232) was contracted to tow the vessel to Tuzla for permanent repairs. The towing operation has commenced on Sep 3 with an ETA as of Sep 6. -- Correspondent.

Exploration ship equipped at Limassol for work off Cyprus

The "Ocean Investigator" has arrived at the Limassol East Container Terminal on March 14, 2018,as political tensions with Turkey over gas exploration rights in the Mediterranean persisted. The ship was due to carry out hydrocarbon exploration in block 10 of Cyprus’ exclusive economic zone (EEZ). A second vessel, the "Med Surveyor", will arrive on March 15. Exxonmobil planned to carry out exploration ahead of possible drilling in the second half of the year. But Turkey blocked similar efforts by Italian energy company Eni last month, saying Turkish Cypriots in an unrecognised enclave in Cyprus’ north should get an immediate share of the revenues. The Turkish President Recep Tayyip Erdoğan reiterated in a speech on March 14 that gas exploration off Cyprus should not take place without the involvement of Turkish Cyprus. The "Ocean Investigator" will remain at Cyprus’ Limassol port until March 24 to load equipment, but it might depart earlier depending on progress.