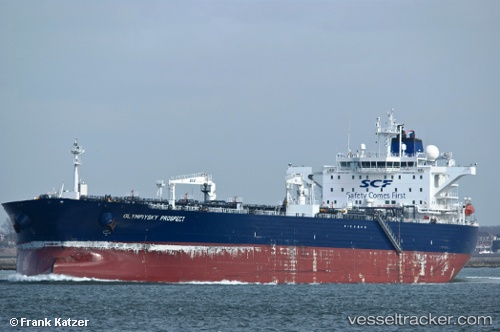 On Feb 11 the "Oympiysky Prospect" left the dry dock number two in Brest after repairs of damage sustained during a docking maneuver in a Baltic port. The the rudder and the wick were distorted. The ship, however, had set sail but was found very difficult to steer. The tanker then headed for Le Havre and after a few days was towed to Brest by the "Fairmount Alpine". The rudder was removed docked on Dec 29. The ship was then towed to a waiting position and docked again on Jan 26 to get the rudder back in the new dry dock of the Damen Shipyard which used the time to conduct various upgrades as well as cleaning and painting of the hull. French report with photo: http://www.letelegramme.fr/finistere/brest/olympiysky-prospect-le-petrolier-quitte-brest-12-02-2015-10524358.ph

The "Olympiysky Prospect" is still at the CIB Shipyard in Brest after in December 2014 the rudder of the tanker had started showing wrong readings. An inspection had uncovered that the rudder was not calibrated correctly and that its movements did not match the readings. The ship was unable to sail any further and an on-site solution was needed. A Hydrex diver/technician team therefore mobilized to Le Havre, to perform an emergency repair operation. After arriving, the Hydrex team performed a detailed inspection of the rudder. This revealed that the rudder pintle needed to be removed to perform a permanent repair. The stormy weather conditions in Le Havre could cause the rudder to move, which would make it impossible to reinstall the pintle on-site. For this reason it was decided that the ship needed to be towed to the nearest available drydock in Brest for permanent repairs. This changed the scope of the work completely. The Hydrex team pulled the rudder to a zero angle. They also took the exact measurements needed to fabricate four securing plates that would fully lock the rudder in the neutral position. Once the plates were delivered, they were modified by the team to the correct size. Next they installed the stiffeners on both sides of the rudder. This would prevent the rudder from moving and causing further damage while the ship was towed. Upon completion of the operation, the attending surveyor, together with the superintendent and captain of the ship, inspected and approved the repairs. The ship was towed safely to Brest for permanent repairs. Because of the extent of the damage to the steering gear, drydocking was the only option for this ship.

On Dec 8, 2014, around noon, the "Olympiysky Prospect" reported a rudder damage to the CROSS Jobourg. The ship had left Le Havre at 7.20 a.m. bound for Russia. At the time of the damage, the tanker moored about 26 nautical miles northwest of Fecamp. In spite of several attempts under the guidance of CROSS Jobourg, the tanker's crew was not able to repair the damage sea. In the late afternoon, the owner decided to tow the tanker to Le Havre. Towing started on Dec 9 by the tug "Abeille Liberté", based in Cherbourg. It sailed from the Cherbourg Naval Base around 10:30 p.m. and had connected to the tanker the next morning at 10 a.m. On Dec 9 at 4 p.m. the tanker was berthed in Le Havre at the Quay de l'Asie. French reports with photos: https://www.premar-manche.gouv.fr/communiques-presse/remorquage-petrolier-manche.html http://www.lemarin.fr/secteurs-activites/shipping/20361-un-petrolier-en-avarie-remorque-vers-le-havre