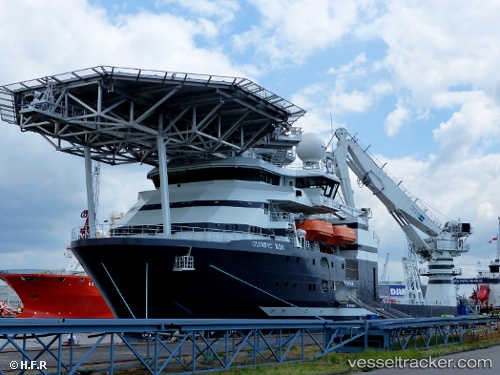 On Dec 4, 2019, the 'Seabed Constructor' located the wreck of the German armoured cruiser SMS 'Scharnhorst' off the Falkland Islands, where it was sunk by the British navy 105 years ago. She was the flagship of German Vice-Admiral Maximilian Graf von Spee's East Asia Squadron and was sunk on 8 December 1914 with more than 800 men on board, including Vice-Adm von Spee himself. The leader of the search, Mensun Bound, said the moment of discovery was extraordinary. "Suddenly she just came out of the gloom with great guns poking in every direction. As a Falkland Islander and a marine archaeologist, a discovery of this significance is an unforgettable, poignant moment in my life." The search for SMS Scharnhorst began five years ago, on the 100th anniversary of the Battle of the Falkland Islands, but was not successful at first. Search teams resumed their operation this year using the 'Seabed Constructor' and four autonomous underwater vehicles. They found SMS 'Scharnhorst' on the third day of the search, at a depth of 1,610 meters. The wreck was not disturbed during the operation and the Falkland Maritime Heritage Trust is seeking to have the site formally protected in law. SMS 'Scharnhorst' was part of the East Asia Squadron, the Imperial German Navy's cruiser squadron which operated mainly in the Pacific Ocean until the outbreak of World War One in 1914. The armoured cruiser played a key role in the Battle of Coronel, fought between the British Royal Navy and Germany's Imperial Navy off the coast of Chile. It was Britain's first naval defeat of World War One and it was a devastating one. The Germans sank two of the four British ships with the loss of more than 1,600 lives. Not a single German sailor died. The defeat at Coronel sent shock waves through the British empire and beyond. The Royal Navy despatched ships from the North Sea down to the South Atlantic and confronted the Germans at the Falkland Islands five weeks later. The British squadron pursued and engaged the German squadron. HMS 'Invincible' and HMS 'Inflexible' inflicted substantial damage on SMS 'Scharnhorst', causing it to sink with all 860 people on board. The Royal Navy then gave pursuit to the remaining German ships. Vice-Adm von Spee's two sons also died, Heinrich on board SMS Gneisenau and Otto aboard the light cruiser SMS 'Leipzig'. In total, 2,200 German sailors died in the battle. The head of the von Spee family said that the discovery of the wreck was "bittersweet". "We take comfort from the knowledge that the final resting place of so many has been found, and can now be preserved, whilst also being reminded of the huge waste of life. As a family we lost a father and his two sons on one day. Like the thousands of other families who suffered unimaginable loss during the First World War, we remember them and must ensure that their sacrifice was not in vain," Wilhelm Graf von Spee said. The Battle of the Falkland Islands had a lasting effect on World War One because as a result the East Asia Squadron, Germany's only permanent overseas naval formation, effectively ceased to exist and could no longer engage in commerce raiding. Reports with photos: https://www.bbc.com/news/world-latin-america-50670743 https://metro.co.uk/2019/12/05/incredible-pictures-show-newly-discovered-warship-sunk-landmark-1914-battle-11276498/

The "Seabed Constructor" has located the French submarine "Minerve" that went missing in the western Mediterranean on Jan 1, 1968, raising hopes the mystery over the disappearance can finally be solved. The wreck was discovered off the southern French port of Toulon in a water depth of 2370 meters. Despite multiple search efforts over the years, the boat which was lost with all 52 crew members had never been found. Parly had announced a new search mission at the beginning of 2019, backed by the latest technology and naval vessels, following fresh demands from the families of deceased sailors to find the remains of the crew. Tides and currents in the western Mediterranean were modelled by the team, while data from the time of the accident was also re-analysed, including seismic reports indicating the likely implosion of the vessel as it dropped to the seabed. The "Seabed Constructor" had arrived on the scene on July 16, 2019.

The French sailing yacht "TI Paradise" issued a distress call in the morning of March 5, 2019, about 1,400 kilometers off Comodoro Rivadavia, after capsizing in pos. 47 ° 58'9 S 045 ° 41'2 W in a storm. The MRCC in Argentina initiated an SAR operation. The "Seabed Constructor" and the Singapore-flagged bulk carrier "Atlantic Monterrey" enroute from to Buenaventura diverted to the boat, as well as the "Estrecho San Carlos" of the Navy. From the Malvinas Islands, a search plane took off. The "Seabed Constructor" was the first to arrive at 10 p.m. after sailing 77 miles and confirmed that the yacht was afloat. The vessel escorted the boat with five men aboard towards the Falkland Islands. One injured sailor, Pascale Noel from Luxembourg, was transferred abaord the Seabed Constructor" and was hoisted on March 8 by a helicopter and taken to Port Stanley. Two other crewmembers, a Uruguayan woman of 68 years and the 66-year-old skipper from France, had been beaten overboard in wave heights of four meters and wind speeds in excess of 60 km / h, and have since been missing. They did not wear lifejackets when they got lost. French report with photos: https://www.clarin.com/sociedad/velero-frances-accidentado-tripulante-herida-trasladada-malvinas-helicoptero_0_bPNLPXsIr.html