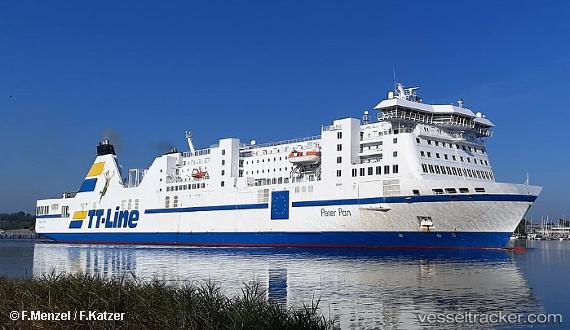 The corrosive substance iron chloride has leaked from tank truck on the "Peter Pan" on Aug 16, 2019, just after 8 a.m. in the port of Trelleborg where the ferry had arrived from Travemuende. A crew member on its routine watch remarked the fluid leaking from the tank. It was unclear how much iron chloride had leaked. The remediation work was started directly by the staff and was taken over by the rescue service. Two forces from the rescue service in Trelleborg wereon site. In addition, chemical units from other locations were called. National rescue resources for dangerous substances attended the site. The effort was expected to last for some hours. Another tank truck was on its way onto which the iron chloride will be pumped over. No one was injured in connection with the leak. All 159 passengers and 112 truck drivers have been safely evacuated from board. The ferry left the port of Trelleborg again at 3.15 p.m. and arrived back in Travemünde at 11.15 p.m. Swedish reports with photos: https://www.svt.se/nyheter/lokalt/skane/jarnklorid-lacker-fran-lastbil-pa-farja-i-trelleborg https://www.gp.se/nyheter/sverige/fr%C3%A4tande-%C3%A4mne-l%C3%A4cker-p%C3%A5-f%C3%A4rja-1.17192463

Ferry out of service after fire

On July 9, 2019, at 6 p.m. a fire broke out in the engine room of the "Peter Pan" due to a mechanical damage of one of the five diesel generators. The ships own fire extinguishing systems could quickly tackle the fire which was out at 6.30 p.m, and the damage remained limited to this area. There were 271 passengers and a crew of 51 on board the ferry which was 5-6 nautical miles NE of Travemünde at that time, serving the route Rostock-Travemünde-Trelleborg and heading to Travemünde. There was strong smoke development on board. The ship initially resumed its voyage, but then its main engine failed, so that two tugs had to be called which reached the ferry around midnight. On June 10 at 2.30 a.m. the ship was berthed at the Scandinavia Quay in Travemünde. All passengers had remained uninjured and were safely disembarked. Those without car were accomodated in hotels in Travemünde by the TT Line. The other continued their voyage. Passengers booked on the ferry on July 11 were rerouted to other ferries. The "Peter Pan" remained at the quay by July 12. The amount of damage had yet to be assessed. The water police Travemünde launched an investigation. The ferry left the Scandinavia Quay in Travemünde again on July 21 at 10.10 p.m. and arrived in Trelleborg on July 2 at 7.30 a.m.

Fire in engine room, fire extinguished by crew, no injuries

Roll On Roll Off Peter Pan (44245 gt, built 2001), reportedly experienced fire in one of its engine rooms, at around 2000 hrs, Jul 9. Peter Pan, after stopping at Rostock, was 6 nautical miles away from Travemunde, when the Captain of the vessel cancelled the approach to Travemunde to extinguish the fire. The crew was subsequently able to extinguish the fire with their resources. Later, the vessel initially proceeded towards Travemunde at a reduced speed. The vessel, operating with limited manoeuvrability, was taken in tow by tugs into Travemunde Harbour, arriving at 0100 hrs, today.