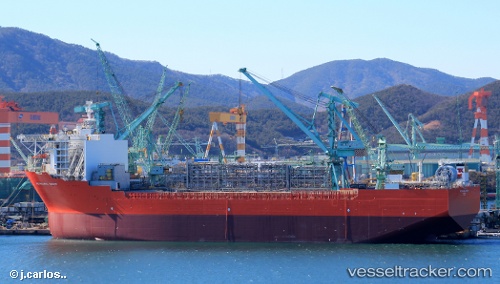 On Nov 22, 2017, in connection with the completion of the MOB installation aboard the "Petrojarl Knarr" in the Knarr oil field, the boat davit was tested by the supplier by swinging the davit beyond the side. In connection with the manoever, the hydraulics failed on davit, and a boat fell into the sea. A standby boat assisted and initially got a tow on board. But the rope failed and the MOV went adrift. There was no staff on board during the test. The standby vessel followed the boat which was drifting towards Iceland watgers, and further action for the recovery was considered during the morning once weather permitted, Meanwhile the boat was back on board.

Norway’s Petroleum Safety Authority (PSA) has unveiled a number of failings, following an audit of Shell's management of the integrity of flexible risers, transfer lines and associated safety equipment on Knarr floating production and storage offloading (FPSO) unit.Knarr is in the North Sea, west of Måløy in Sogn og Fjordane county and some 50km north-east of Snorre, at 410m water depth. The field has been developed using subsea wells and a floating production unit, Petrojarl Knarr FPSO. Oil is loaded from Knarr FPSO into tankers, while the gas is piped to St. Fergus in Scotland. Production on the field began in March 2015. From 3-6 October 2016, the PSA carried out an audit of how Shell is managing the integrity of flexible risers, transfer lines and associated safety equipment, and of Teekay's activities as production operator. The Petrojarl Knarr FPSO received acknowledgement of compliance (AoC) from the PSA in October 2014 The audit revealed non-conformities relating to: overpressure protection of gas export pipeline; follow-up of overpressure protection performance requirements; passive fire protection; and follow-up of flexible pipelines. In addition, improvement points were detected in connection with the labelling of equipment; follow-up and verification; and maintenance management Shell (AS Norske Shell) is the operator of the field, while Teekay owns and operates Petrojarl Knarr. Shell took over operatorship of Knarr from BG Group Norway in February 2016 The companies have been given a deadline of 1 February 2017 to report on how the non-conformities will be dealt with and how the improvement points will be assessed. Source: OEdigital

A fire that broke out on a Norwegian offshore FPSO, was caused by a mixture of design errors and faulty operation of the HVAC system.According to Norwegian investigators, the Petroleum Safety Authority (PSA), the fire broke out on the morning of the 24th March 2015 and originated from the Petrojarl Knarr FPSO’s HVAC system.The Petrojarl Knarr Floating Production Storage Offloading (FPSO) vessel, is stationed offshore Norway and operated by BG Group. The FPSO is owned by Teekay, and has been leased to BG Group for an initial 14 years with options to extend. The FPSO is Teekay’s largest to date and was delivered in 2014. According to the PSA, a power outage had preceded the fire, causing all systems to shutdown. There investigations showed that once power was restored, the fans to the HVAC system were not restarted. However, steam continued to be supplied to the heat exchanger within the system. The PSA have said that these events cause continual high temperature buildup around the air filter cassette, until they eventually ignited around 8 hours after the initial incident. The resulting fire occurred in the HVAC system, directly beneath the FPSO’s living quarters. The investigation found that, had it not been for the fire damper vales, smoke could have entered the living quarters. The fire was eventually extinguished 30 mins after ignition.The PSA found that a number of breaches and nonconformities during its investigation, covering both technical, mainly design errors and faulty operation, but also relating to the response to the emergency. A design error meant that the valve for the steam heating system did not automatically close when the fans stopped. Steam temperature in the HVAC unit was about 100°C.The filter cassettes used had a maximum design temperature of about 70°C. They collapsed as a result of lengthy exposure to a temperature of roughly 100°C. The fan system was not restarted after the power failure the day before. Bringing fan systems back on line formed part of the “black start” procedure, but the latter was not followed. Alarms in the CCR from the HVAC unit were not perceived as critical after the power failure the day before. They were given the lowest priority on the screen.The system description and restrictions for running the system in manual mode were not clearly explained in the system documentation.Knowledge about and familiarity with the consequences of operating the system in various operational modes were insufficient, and a lack of clarity prevailed about roles and responsibilities for operating the system. Source: offshorepost