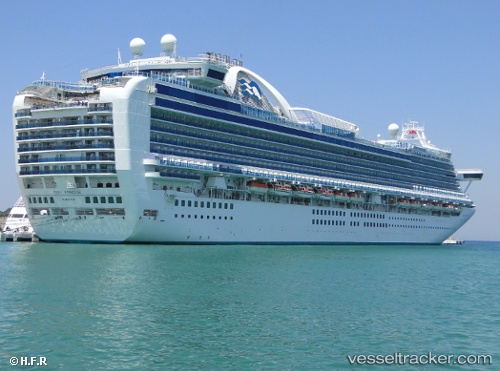 On March 27, 2022, the 'Ruby Princess' docked in San Francisco had multiple passengers and crew members who tested positive for the coronavirus. She returned to San Francisco from a 15-day Panama Canal cruise, and the tests were conducted en route. All infected people were either asymptomatic or mildly symptomatic, and were quarantined and isolated onboard while being monitored by medical staff. The cruise was operated as a vaccinated cruise, as defined by the U.S. Centers for Disease Control and Prevention. Passenger and crew vaccination rates were at 100%.” Guests who tested positive and did not complete the isolation period on the ship will either return home with private transportation or will quarantine at hotels ashore who coordinated in advance The 'Ruby Princess' departed on March 28 at 3.55 a.m. for a 15-day cruise to Hawaii.

A passenger of the 'Ruby Princess' who fell ill hundreds of miles at sea is back on land after a rescue mission by the California Air National Guard’s 129th Rescue Wing in the afternoon of Feb. 11, 2022. The ship was 345 nautical miles west of San Francisco. U.S. Coast Guard District 11 requested support from the 129th Rescue Wing when the vessel reported a 35-year-old man was experiencing stroke-like symptoms. Three hours later, the wing launched two HC-130J Combat King II aircraft and one HH-60G Pave Hawk helicopter. Once the aircraft reached the cruise ship, Guardian Angel pararescuemen hoisted themselves down onto the vessel. They stabilized the patient before hoisting him up into the hovering helicopter for transport to Stanford Medical Center in Palo Alto that evening. The patient is the wing’s 1,153rd life saved. Report with photo: https://www.nationalguard.mil/News/Article/2943129/california-air-guard-medevacs-stroke-victim-from-cruise-ship/

The crew and company operating the 'Ruby Princess' will not be prosecuted after an investigation concluded it would not be in the public interest. The NZ Customs Service has released findings under the Official Information Act following a 20-month investigation into the 'Ruby Princess' and whether any offences were committed prior to its arrival in New Zealand on March 11, 2020. The cruise ship carrying 2671 passengers and 1146 crew left Sydney in the early hours of March 9. It arrived in Milford Sound on March 11, then made further stops in Dunedin, Akaroa, Wellington and Napier before cutting its trip short and leaving NZ waters on March 15. By the time the ship got back to Sydney on March 19 numerous people were seriously ill with Covid-19. The Customs investigation, like the Special Commission of Inquiry report before it, draws no conclusion as to how or when the virus got on board the ship. 28 people died as a result of the ship outbreak and more than 700 were infected. Before it left New Zealand waters the ship had spread the virus to 24 people in the country. It is known now that Covid-19 was present on the ship before it arrived in New Zealand, because at least one passenger, Tony Londero, was symptomatic. Despite becoming increasingly unwell, he did not seek medical attention until March 16. The Customs investigation found that although the virus was likely to have been on the ship when it arrived in New Zealand, the investigation has found no evidence of the crew, agent, or anyone else connected with the Ruby Princess being aware of a Covid-19 infection prior to arrival in New Zealand. There was evidence to prove that the ship’s staff had committed an offence by failing to submit an Advance Notice of Arrival (ANA) to Customs at least 48 hours before the ship was due in Milford Sound, but the notice was submitted just eight hours late and that was due to additional screening of passengers being undertaken in Sydney. "There was no evidence that the delay was part of a deliberate attempt to circumvent border controls and the ANA was submitted relatively quickly after the deadline passed. There was no evidence the delay had any causative effect on the cluster of 24 Covid-19 cases in New Zealand that are attributed to the Ruby Princess,” the investigation found. It was not in the public interest to prosecute for that offence, the investigation found. It also found insufficient evidence to prove that the ANA submitted on March 9 was erroneous, misleading or not genuine. The ship’s staff were aware of six people who were ill with suspected infectious diseases before the ship arrived in New Zealand, but these did not meet case definition criteria for Covid-19 at the time, and all were notified before the ship was granted pratique. When the ship was in Wellington on March 14. five passengers were tested for Covid-19, all returning negative results. A criminal investigation into the arrival of the 'Ruby Princess' in Sydney by New South Wales Police was ongoing. The Customs investigation noted “it is possible, but not likely, that further material relevant to New Zealand will be gathered during the course of that investigation”. A class action against Carnival Corporation was also ongoing.