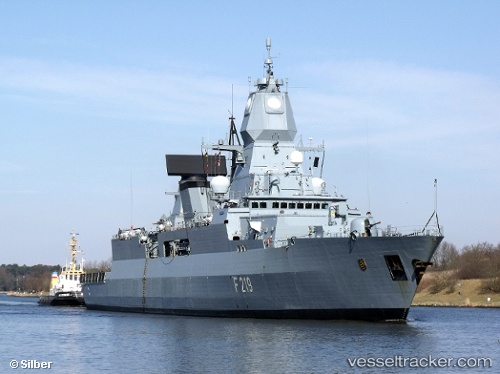 The 'Sachsen' had to abort its training mission in the Baltic Sea and had to return to the naval base in Kiel on Feb 23, 2021, after three of the about 200 crew members were infected with the corona virus. It was planned to start the training off Neustadt on Feb 23, but three testings for Covid 19 during the transit from Wilhelmshaven to Kiel were positive. All contact persons were disembarked once the ship had berthed at the Scheer Jetty. The infected soldiers among with 20 more comrades were isolated on Feb 23 and were now quarantined. As no other crew members had positive PCR tests, the release of the ship was to be decided on Feb 25. The 'Sachsen' had left Wilhelmshaven only on Feb 22 after lengthy repairs of an explosion damage caused by a malfunctioning missile.

Damaged fregate back in Germany

On June 26 the "Sachsen", still bearing the scars of the explosion on board, returned to the naval port in Wilhelmshaven. After passing the sea locks, she berthed at the repair quay for further inspections and damage surveys at the quay. German report with photos: https://www.geniusstrand.de/26-06-2018/fregatte-sachsen-f219-unfall-flugkoerper-uebung-norwegen-wilhelmshaven-marinstuetzpunkt#more-40669

Rocket burnt out in launcher

In the night of June 21, 2018, a fire broke out aboard the "Sachsen". An SM-2 missile did not launch during an exercise due to a technical failure, but burnt out in its vertical launcher off the bridge of the fregate which was north of the polar circle in a Norwegian exercise area. The crew was able to extinguish the fire, supported by the ship's own automatical extinguishing system. Two soldiers had to quit their job for stress symptons. The damage was considerable. The ship entered the port of Harstad for surveys jointly with the "Lübeck" in the morning of June 22. Another missile had been successfully started before, and the exploded rocket had been technically surveyed as well before the take off. German report with photos and video: http://www.marine.de/portal/a/marine/start/aktuelle/!ut/p/z1/hY_LCoMwEEX_yIm2vpaKjwoiUkvbZFOCCTbFJhJS6aIf30jBnXQWF-bemTMMELgCkXQWAzVCSTraHpPglkb1qfZiz6sLlKAqz5uD71duWe7hDJd_I8TGaKMSBB3jgC0j3GTsPOiAAGHc6ZXkZlHDpRFWB02N0s6ktBmX5KW1TRzBACM3S1G4nnI_CcFZ6wcxyqr0uAAfdKbvdZf2y9OA71SykbeqT37G9CyipvGHL8CTPhE!/dz/d5/L2dBISEvZ0FBIS9nQSEh/#Z7_B8LTL2922LF0A0IEENH55I1G32 https://www.facebook.com/deutschemarineblog/videos/1859159071044735/