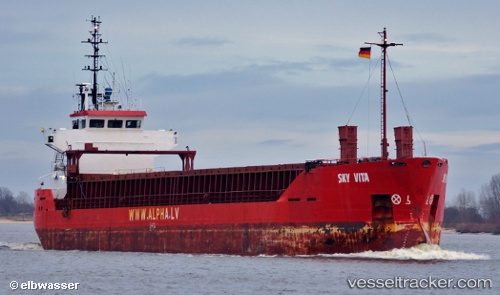 The 'Sky Vita' suffered an engine problem, involving a nozzle, enroute from Avonmouth to Rekefjord eight miles east-northeast of Lizard point in position 50 00 23 N, 05 00 23 W, on Aug 6, 2020, at 7.15 a.m. The vessel dropped anchor to conduct repairs. The defect was expected to be rectified in about five hours, and the ship reached its destination on Aug 11 at 7.30 a.m.

Grounding on the Ouse

The "Sky Vita" ran aground on March 29, 2018, short after 5 a.m. on the river Ouse near Saltmarshe, while proceeding upstream to Goole. The ship had sailed from St. Petersburg on March 20 at 2 a.m. Two tugs were called to assist refloating the vessel with the rising tide, and in the late afternoon it had resumed the voyage, transiting the Ouse at 9,5 knots speed. Photos: http://www.shipspotting.com/gallery/photo.php?lid=2831804 http://www.shipspotting.com/gallery/photo.php?lid=2831796