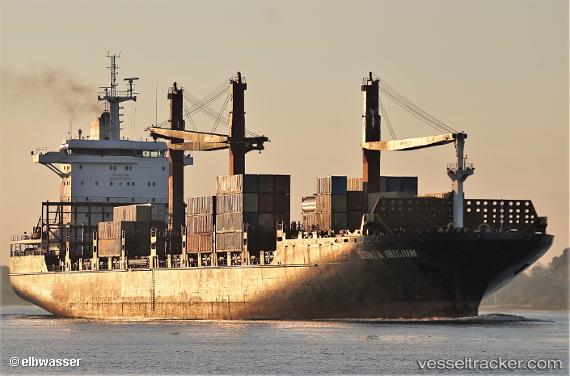 Damage survey aboard the 'Songa Iridium' has been completed by the surveyor panels. The salvage expenses were paid by the agent to the coastal safety account on behalf of the owners. Upon completion of further formalities, the vessel was granted departure permission from the Harbour Master. The vessel was shifted from Istanbul anchorage to Ambarli, in order to carry out routine cargo discharge operations on Jan 16 and dropped anchor in pos. 40° 56.55' N 028° 36.62' E at 10.50 p.m. She left Istanbul on Jan 30 at 7.40 p.m. and dropped anchor off Malta on Feb 3 enroute to Algeciras with an ETA as of Feb 7.

The 'Songa Iridium', which had been hit by technical problems and allided with a wharf in the Bosphorus Strait has now been repaired and was ready to sail again according to the German ship manager, Nordic Hamburg Shipmanagement. It remained unclear exactly which technical problems caused the ship to hit a quay a week ago as it headed south into the upper part of the Bosphorus Strait. The Nord Hamburg Ship Management will continue its cooperation on investigations of theincident with both authorities and class companies. The accident only resulted in minor damage to both ship and quay. The ship was towed to a safe anchorage and remained anchored south of Istanbul since. At the mooring, an underwater inspection was carried out by divers under supervision of classification society surveyors on Jan 1, Internal section, the fore peak, the bulbous bow section and internal damage surveys conducted by a surveyor panel. Witnessing crew statements were collected by the Harbour Master's incident investigation desk. The vessel's departure permission was yet to be issued.

Enroute from Istanbul, where it had sailed at 10.10 a.m., to Antwerp the 'Songa Iridium' ran aground off the Sariyer quarter underneath the Rumeli Fortress in vicinity 41° 3.08' N 029° 2.46' E in the Bosphorus on Dec 27, 2019, at midday. The ship dropped its port side anchor while drifting perpendicular to the fairway towards the shore. It finally got stuck with slow speed just a few meters from the promenade. No one was injured. Several tugs and rescue ships were deployed to assist by Coastal Safety, among them the 'Bogazici-1', 'Cevre1', 'Kiyi Emniyeti 5', 'Kurtarma 2', 'Kurtarma 7' and 'Nazim Tur'. The ship was refloated short time later and moored in pos. 40° 58.87' N 028° 57.18' E for inspections with the SAR-boat 'Kiyi Emniyeti 5', the tug ‘Kurtarma 7‘ and the patrol boat ‘TCSG 12‘ attending. Reports with photos and video: https://www.youtube.com/watch?v=d2cPgc9JxOI https://www.hurriyet.de/news_containerschiff-land-228-uft-im-bosporus-auf-grund_143530209.html https://www.aksam.com.tr/yasam/istanbulda-gemi-kazasi-son-dakika-istanbul-bogazinda-songa-iridium-gemi-kazasi-yasandi/haber-1033279 https://www.f5haber.com/gundem/yuk-gemisi-istanbul-bogazinda-karaya-oturdu-5306265 http://www.gunes.com/gundem/istanbul-sariyerde-songa-iridium-adli-kargo-gemisi-karaya-oturdu-1050434 http://www.hurriyet.com.tr/galeri-kocanla-arani-duzeltecegiz-diyerek-2-milyon-lira-dolandirdilar-41407126