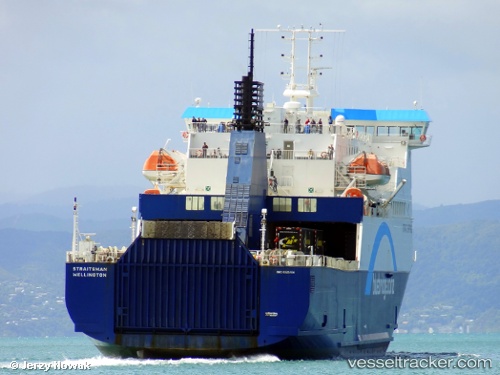 In the afternoon of Feb 13, 2019, the "Straitsman" hit a navigation light at the end of a wharf at the Wellington terminal. The service was already delayed for an hour due to the bad weather. The ferry, which was already running an hour late, clipped the navigation light, attached to the sea bed with a pile south of Kings Wharf, which is the most eastern of the two areas passengers disembark from. The Master then decided to discontinue berthing during a particularly strong wind gust. Once the gust had passed, he manoeuvred the ship into position again and berthed successfully. The ferry was assessed for damage before its next departure. There were no reports of injuries.

The "Straitsman" crashed into a navigation light while berthing in Wellington during strong wind gusts on Nov 27, 2018. The ferry, which was already running an hour late, hit the light off the end of Kings Wharf as it was berthing before 12.45 p.m. It successfully berthed on its second attempt. The decision was made to discontinue berthing during a particularly strong wind gust that saw it clip the light above the water line. The ship was assessed for any damage before to its next departure. Report with photos: https://www.radionz.co.nz/news/national/376911/bluebridge-ferry-crashes-into-navigation-light-while-berthing

There have been no sightings of chilled pork or the trailers since they went overboard from the "Straitsman" in the Cook Strait on July 18. The B-train trailer was carrying two shipping containers filled with chilled pork, and a tug unit was attached to it. They broke free of their chains, smashed through a railing and toppled off the Bluebridge's ferry at 10.30 a.m. A Coastal Navigation Warning issued for an area approximately 7.5 km south of Island Bay, warning of the potential for semi-submerged debris, would be cancelled at 1.30 p.m. on July 20. aritime NZ was still making preliminary enquiries and was yet to decide whether it needed to investigate the incident. The damage to the "Straitsman" was repaired in time for the 2.30 a.m. sailing leaving Wellington for Picton on July 19. Zjr Bluebridge's own investigation into the cause of the incident would take a few weeks. Report with photos: http://www.stuff.co.nz/dominion-post/news/82239720/less-than-24-hours-after-losing-a-truck-trailer-overboard-a-cook-strait-ferry-is-back-in-service