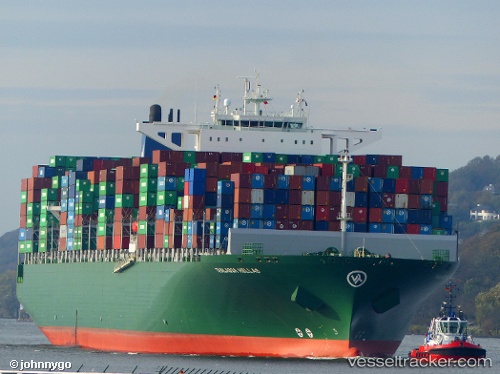 The "Thalassa Hellas" allided with a pier while mooring at around noon on Jan 23, 2015, in Piraeus. The vessel suffered a breach 3x2 meters at portside amidships above the waterline. No leak was reported. The vessel was to undergo survey and probably, repairs. The ship arrived at Piraeus coming from Malaysia. The allision was caused by human error.

The maiden visit marks Evergreen Line’s entry into the league of ULCS operators and with 6,750 moves or 11,500 TEU handled at her first port call in Europe a new record was set for ECT, the company said in its press release. The Thalassa Hellas was berthed at Evergreen’s dedicated facility at the south side of the ECT Delta Terminal,which is just one hour from the port entrance and, following the widening of the harbour basin, offers even better access to ULCSs 24/7. The record volume handled during this first port visit signals the commitment of Evergreen Line to Rotterdam and ECT as their main hub port in North West Europe. Wando Boevé, CCO of ECT: “We highly value our long lasting relationship with Evergreen and are proud of this new record. ECT is continuously investing in its capabilities to offer our customers all the facilities necessary to handle their vessels whatever the size. Our service however does not stop at the waterside as we also offer unprecedented possibilities for reliable and sustainable hinterland transport.” The Thalassa Hellas is deployed in Evergreen’s Far East Europe Service (CEM Service) calling at the ports of Qingdao, Shanghai, Ningbo, Hong Kong, Yantian, Tanjung Pelepas, Colombo, Suez Canal, Rotterdam,Felixstowe, Hamburg, Zeebrugge, Suez Canal, Colombo, Tanjung Pelepas, Hong Kong and Qingdao.

The Greek Lemos Group and its ship management company Enesel S.A. have taken delivery of the THALASSA HELLAS, the first in a series of ten 13,806 teu container vessels for Evergreen Marine. Built at Hyundai Heavy Industries of South Korea, the delivery of the new vessel does not only mark Evergreen’s first foray into the ultra-large boxship league, but also Lemos’ entry into the container sector. Until now, the shipowner had focused on the drybulk and tank markets. Read full story: http://linervision.wordpress.com/2013/09/18/thalassa-hellas-13806-teu-heralds-evergreens-move-into-the-ulcs-league/