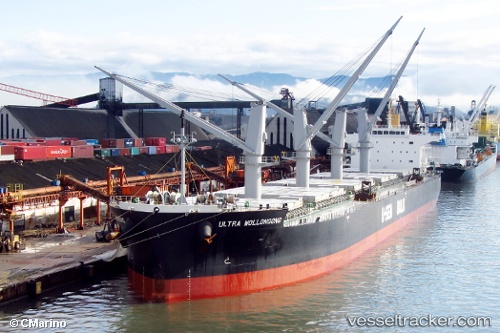 A fire broke out in the cargo of the 'Ultra Wollongong' on Nov 22, 2020, at 11.15 p.m. at the Canada Dock 2 in the port of Liverpool. The bulk carrier had arrived at Liverpool on Nov 20, at 12.40 p.m., coming from Dublin. The vessel had been loaded with scrap metal that had been on fire, caused by faulty Lithium battery. The crew of 20 was evacuated. The fire service and police were at the scene after being notified of the incident by the Liverpool Port Control. Holyhead Coastguard tasked CRT as safety cover for the emergency workers on the shore side. Fire and port operatives continued monitoring the vessel until the cargo was offloaded. Tenders were standing by vessel. The vessel was to undergo inspections, to determine its seaworthiness, prior to departure.

The 'Ultra Wollongong' suffered a main engine failure at Vancouver harbour on Dec 5, 2019, at 3.40 p.m. The pilot reported that the main engine had no forward propulsion. He utilized the assigned berthing tug to bring the vessel alongside. The ship sailed from Vancouver on Dec 8 at midnight en route to Singapore, ETA Dec 30.

A Filipino sailor was transferred to the Pierre Zobda Quitman University Hospital in Fort-de-France after a serious accident aboard the "Ultra Wollongong". He was badly burned at face and arms. The CROSS AG was alerted on June 30, 2018, in the morning, and following a conference call with the Marine Medical Consultation Center (MCMC), a medevac was decided. The ship was located more than 450 miles off Martinique, and it was diverted to rendezvous with the helicopter "Dragon 972". The hoist took place on July 1 around 8 p.m. 80 miles east of Martinique. The shi resumed its voyage fomr Saint John to to Brazil.