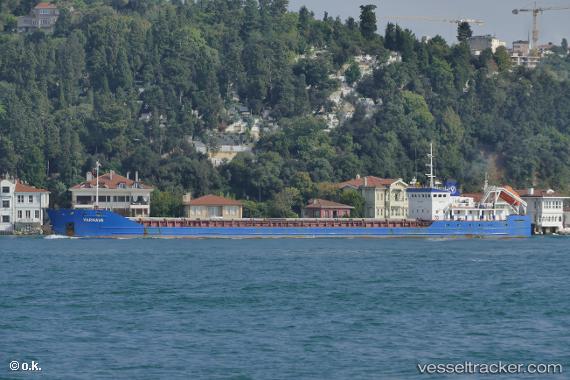 The 'Varnava', en route from Bandirma, to Yeisk, suffered a technical failure while entering the Istanbul Strait from the southern entrance for its transit on March 5, 2020, aroudn 11 p.m. Subsequently, the vessel dropped its anchor at Büyükdere anchorage for repair works. The ship remained moored in pos. 41° 9.46' N 029° 2.92' E as of March 7.

The 'Varnava' developed problems with its steering gear and ran aground in the Black Sea off the port of Azov on July 31, 2019, at 9 a.m. There were no reports of any injuries. Although the steering has been repaired, tugs have so far been unsuccessful in dislodging the vessel which was enroute from Azov to the port of Tekirdag.

The "Varnava", en route from Iskenderun to Azov in ballast condition, suffered a technical failure at Uskudar point in the Istanbul Strait on Jan 9, 2019. Subsequently, the vessel shifted to Istanbul anchorage the same afternoon. Repairs were being conducted by crew in pos. 40° 58.47' E 028° 56.85' by Jan 11. The ship arrived at and sailed from Kavkaz anchorage on Jan 15 and berthed at Azov on Jan 15.