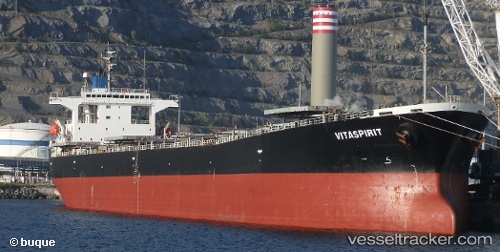 Vitaspirit towed from Istanbul to Tuzla

The "Vitaspirit" was shifted from Istanbul anchorage to Tuzla anchorage under supervision of a Coastal Safety tug on June 2, 2018, and dropped anchor at Tuzla roads at 3 p.m. The vessel's departure permission was yet to be issued by the port captain due to incomplete legal procedures. The vessel remained stationary and still under arrest at Tuzla anchorage since. It had suffered an engine failure and had run aground at the Hekimbasi Salih Efendi mansion, Beylerbeyi Point, in the Istanbul Strait on Apr 7. After having been refloated and towed to Istanbul anchorage, she was awaiting temporary repairs. The "Vita Spirit" sailed from Pendik on June 22, bound to Jedda, ETA July 1.

The underwater section of the "Vitaspirit" has been subjected to detailed surveys by divers in the presence of class and other surveyor panels, while crew witness statements have been collected by port master's incident investigation desk. An initial detailed damage survey of the historical mansion struck by the "Vitaspirit" has been carried out by appointed experts. Departure permission for the vessel has yet to be issued due to unpaid salvage expenses and letter of guarantee, so the vessel remained stationary at Istanbul anchorage on Apr 18.

An Istanbul court has issued a warrant for the seizure of the "Vitaspirit" after the owners of the Hekimbasi Salih Efendi mansion applied to the Istanbul 17th Commercial Court of First Instance on April 9, demanding a lien to be enforced afer their mansion was left with extensive damage, noting the 18th century building has lost its historical staus as a result of the crash on April 7. The vessel with a pilot on board had suffered main engine issues and veered off course, hitting the shore and slamming into the building. It dropped anchor immediately after the accident, but to make things worse the anchor ended up in a power cord over as the ship continued. The "Vitaspirit" remained stationary in pos. N 40° 58.80' E 028° 57.25' where it had dropped anchor on Apr 7 at 2.30 p.m. off Istanbul.