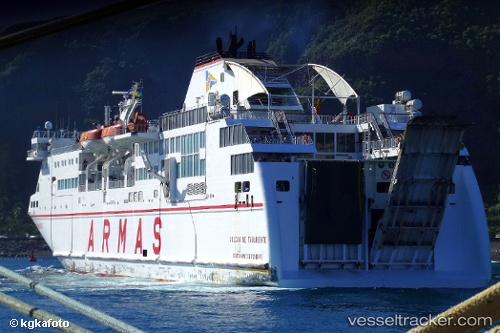 The 'Volcan de Taburiente' and the 'Ciudad de Valencia' have been offered by the Naviera Armas Trasmediterrán eato the emergency services to help with the response after the outbreak of a volcano on La Palma volcano. The shipping company has been the first shipping company to offer ships to the Government of the Canary Islands and the island council of La Palma with the aim of collaborating in the transport of the different units that were moving to La Palma. Members of the state and security forces, firefighters and civil protection have joined the forces of the town as well as of the Autonomous Community. The ferry company has already transported different units of the army that were working in La Palma working on emergency tasks.

In the morning of Feb 23, 2020, the 'Bencomo Express', was in collision wioth the 'Vólcan de Taburiente', in the port of Santa Cruz in Tenerife. The latter was docked at the Cristiano Pier in the entrance of the port. The 'Bencomo Express' was just coming from San Sébastian in Gomera when the stormy winds caught the ship which was pushed towards the larger ferry the bow of which hit the stern on the starboard side, causing scratches and holes at the height of the deck. The catamaran ferry, which was already half an hour late due to the storm, broke off the docking maneuver and sailed back to La Goméra. The 'Vólcan de Taburiente' left the port of Tenerife at 9:15 p.m. towards San Sébasitan on Goméra. Both ships did not suffer major damage and remained in service. Spanish reports with video: https://www.teldeactualidad.com/noticia/canarias/2020/02/23/2120.html https://www.eldiario.es/canariasahora/tenerifeahora/sucesos/Fred-Olsen-Armas-chocan-Cristianos_0_998800325.html

The "Volcan de Taburiente", serving the route between Los Cristianos and Santa Cruz de La Palma, arrived at the port of Santa Cruz on July 15, 2018, with an hour of delay, having suffered a breakdown during the sailing from the port of Tenerife, where it had sailed at 12:30 p.m. It arrived in La Palma around 5.30 p.m.