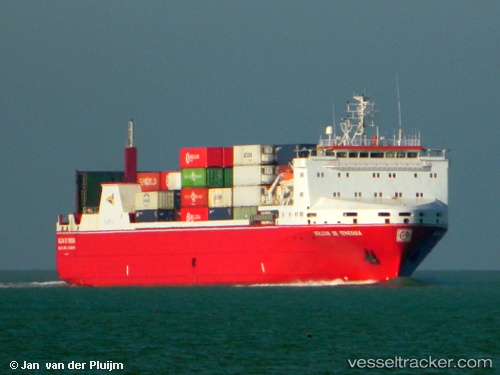 Repairs of the fire damage in the engine room of the "Volcan de Teneguía" at the yard in Las Palmas de Gran Canaria were finished on Jan 15. At 9.50 p.m. the ferry left the port, bound to Cadiz, where it arrived on Jan 18 at 7.50 a.m. It resumed its service between Cadiz, Santa Cruz de Tenerife and Las Palmas on Jan 20 at 11.45 p.m. with a first arrival at Santa Cruz on Jan 21 at 2 a.m.

All wiring to be replaced

After the fire in the engine room on Aug 2 the "Volcan de Teneguía" remained unter repair of the engine room at Las Palmas de Gran Canaria. Among other planned works, it has become necessary to replace all the wiring of the ship, as well as other equipment that was damaged by the fire. Photo: http://www.shipspotting.com/gallery/photo.php?lid=2944408

On Aug 2, 2018, at 1.10 p.m. a fire broke out in the engine room of the "Volcán de Teneguía", enroute from Cádiz to Santa Cruz, ETA 8 p.m., around 85 miles north of Gran Canaria. On board were a crew of 17 and two passengers as well as 200 container and roro cargo units which were not affected. The pollution control vessel "Miguel de Cervantes" (IMO: 9320116) and the "Guardamar Talía" of Salvamento Marítimo were mobilized to assist as well as the helicopter Helimer 211. Also the good samaritan "Bonny" was in the area. The fire could be controlled by the crew, and no evacuation was necessary. However, the ship lost propulsion and was being towed by the "Miguel de Cervantes" to the port of La Luz in Las Palmas de Gran Canaria, escorted by the Spanish tug "VB Brandy" (IMO: 9204465). She arrived in port on Aug 3 at 5.15 p.m. Spanish report with video, photo: https://www.abc.es/espana/canarias/abci-video-incendio-buque-entre-canarias-y-cadiz-201808022016_noticia.html https://pbs.twimg.com/media/DjrIJUHX0AIwulY.jpg