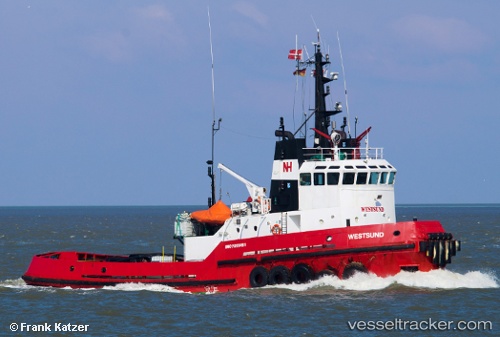 The Dutch 23-m-pilot boat "Reiger" was in allision with the Dutch windfarm support vessel newbuilding "Acta Orion" , 3999 gt (IMO: 9750268), in the afternoon of June 8, 2015, in the port of Harlingen, when the "Westsund" towed it to port. Despite the assistance of three more tugboats, the "Anita", "Theo" and "Jenny", the 108-m-casco was caught by a wind gust during mooring operations and was pushed against the pilot boat which was berthed at a pier in the new fishery port. The "Acta Orion" was coming from the Stocznia shipyard in Sczcecin to be fitted out at the CIG Shipbuilding. The bulbous bow hit the pilot boat at starboard side and caused considerable damage. Dutch report with photos: http://www.scannernet.nl/nieuws/actueel-nieuws-harlingen/1405-acta-orion-harlingen

On, 2013, July 28 the cargo m/v "Perseus" (IMO: 8616087), enroute from Oxelosund to Hamburg, was in collision with the "Westsund" which, jointly with the German tug "Vorwärts" was transporting the barge "SB 7020" from Rotterdam to Sassnitz in the Kiel Canal. At Buchholzer Moor the tow came perpendicular to the fairway. The "Perseus" remarked that the ships were turning to port and tried to go full astern but hit with its foreship against the port side bow of the "Westsund". Both vessels suffered hull damage. The "Westsund" was further damaged at the stern when the "SB 7020" hit the stopping ship. The tow was advised to berth in Rendsburg, where repairs at the tug were to be carried out, and the "Perseus" docked at the South Quay in Brunsbüttel. It proceeded to Hamburg at 1 p.m. and docked at warehouse 84 at 5 p.m. Short time later it proceeded to the Norder Yard for some repairs before returning to the warehouse on July 29 at 2 p.m.

On June 12, 2012, at 9 p.m. the "Westsund" reached Hoek van Holland with 2 jack-ups coming from Copenhagen. The winch of "Westsund" was broken and at the height of the Breedeep the towing wire had to be slipped to avoid danger. The "Albatros" took over the tow and pulled the jack-ups to the Waal Port. The "Westsund" proceeded to Skagen where the tug was moored at the Factory Quay in the morning of June 15. Dutch photo report: http://www.tugspotters.com/site/content/2012/06/westsund/