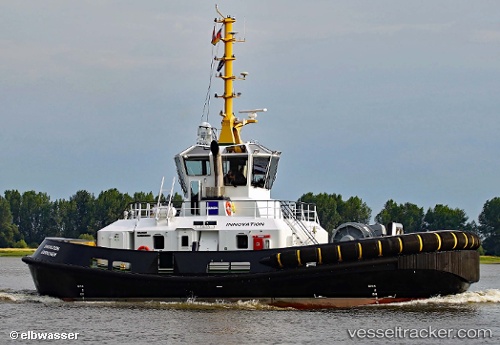 Damen’s radical new ‘always bow first’ RSD Tug 2513 has reached the final stage of this year’s prestigious Maritime Award KNVTS Ship of the Year prize. As one of the last three entrants in contention for the award, the Damen RSD Tug 2513 will be judged on a range of criteria including its design, safety, economy, durability and construction process, and the winner will be announced at the Gala Dinner taking place on 12th November. The 25-metre RSD Tug 2513 is the result of years of research and development by Damen in cooperation with its towage customers and research institute partners. The innovative design combines elements of tractor tugs and ASD tugs to create a new class of vessel that effectively has two bows, enabling it to always operate bow first. This makes it exceptionally efficient as it is equally effective at bow and stern assists.

Following a European tour including Southampton where it was presented to ‘MJ’ and other industry media, Damen’s new Reversed Stern Drive Tug 2513 ‘Innovation’ has been put to the test in a series of trials at Felixstowe.

Fresh from a European tour that has taken her to the shores of Malta, Italy, France, Spain, Portugal, Gibraltar, Great Britain, Belgium, the Netherlands and Germany, Damen’s new RSD Tug 2513 Innovation has taken part in towing tests in the Port of Felixstowe, UK. The intention of the tests was to allow the Innovation to undertake a number of tows, in various positions, in a controlled and safe manner, gradually building up until she took on a powered indirect on ultra large container vessel (ULCC) the OOCL Hong Kong, 400m x 14.8m draught, departing from Trinity 9.