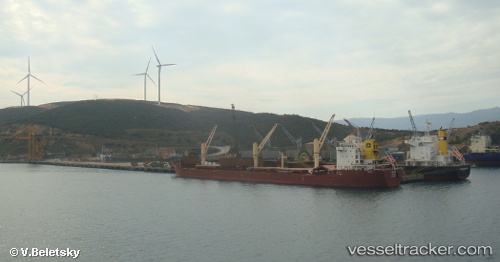 Turkey commissioned Friday the country's first LNG floating storage and regasification unit (FSRU) at Aliaga, north of the port city of Izmir on the country's Aegean coast. The unit, developed by ETKI Liman Isletmeleri Dogalgaz Ithalat ve Ticaret A.S. or ETKI, a subsidiary of Turkey's Kolin Holding, has a tanker unloading capacity of 6,000 cu m/hour with a maximum annual regasification capacity of 5.01475 Bcm/year, or 13.74 million cu m/day and storage capacity of 142,862 cu m of LNG. Officials speaking at the opening ceremony did not say if it was already handling its first cargo, or when that might arrive.

Ship suspected of carrying radioactive waste cleared, to be dismantled in Turkey

Turkish authorities have cleared a ship that was suspected of carrying radioactive waste and it is on its way to the Turkish coast for destruction. Turkey's Chamber of Environmental Engineers warned last week that a ship laden with radioactive material and waste had recently left Angola and was approaching an Aegean port in the province of İzmir, saying that the ship is dangerous and should be intercepted before entering Turkish waters. The ship, called Kuito, had once been used to refine petroleum and will dock in the Port of Aliağa for demolition. The chamber said the ship could refine 100,000 tons of petroleum and therefore has a high level of radioactive waste and hazardous material on board. At the request of environmentalists, Turkish authorities intercepted the ship six miles off the Turkish coast for an inspection. Inspectors from the Turkish Atomic Energy Agency and the İzmir Environmental Directorate examined the ship on Wednesday and concluded that it contains no hazardous material. The ship will be dismantled at İzmir's Aliağa demolition center, which has become a hub for ship demolition. http://www.todayszaman.com/latest-news_ship-suspected-of-carrying-radioactive-waste-cleared-to-be-dismantled-in-turkey_371864.html

A ship loaded with a radioactive material left Angola recently and is approaching to the Aegean port of İzmir, head of Chamber of Environment Engineers (ÇMO) Baran Bozoğlu said, warning that the dangerous ship should be intercepted before entering Turkish waters. Bozoğlu told a news conference on Friday that the ship called Kuito is carrying a radioactive material and will dock in İzmir's Aliağa port for removal procedures. He added that before the ship enters into the Turkish territorial waters in 24 hours, it should be stopped and examined. "A big danger is nearing Turkey," Bozoğlu warned, adding that they warned both Coastal Guards and the Transportation Ministry. He said authorities know what "we know" but they had to warn the public as the ship is approaching Turkey while the authorities are oblivious to the matter. He noted that Kuito ship, according to a report released in 2013, has a capacity to refine 100,000 tonnes of petroleum and includes high level of radioactive waste and hazardous material. "Once it enters into Turkish territorial waters, it will be impossible to return the ship. Because once it runs aground on Turkish soil, it will require huge costs to again make it moving," Bozoğlu said. http://www.todayszaman.com/latest-news_radioactive-laden-ship-nearing-turkish-port-environmentalists-protest_371319.html