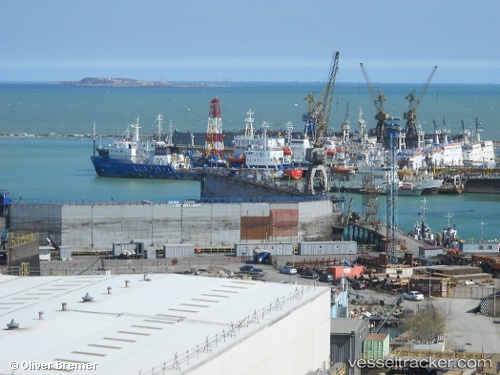 Keppel Corporation terminated an agreement to manage and provide technical services to Baku Shipyard. Baku Shipyard LLC is a joint venture by Keppel Offshore & Marine (KOM), State Oil Company of Azerbaijan Republic (SOCAR), and Azerbaijan Investment Company (AIC) that was formed in 2013 to develop a shipbuilding and shiprepair facility in Baku, Azerbaijan. As part of the development, Baku Shipyard signed agreements (MSA and TSA) with KOM subsidiaries Caspian Offshore and KSM Management for the JV company’s management and technical services.

Six new overhead cranes will be installed in the Baku International Sea Trade Port in Azerbaijan’s Alat settlement by mid-2018. Delivery and installation of the cranes will be fully completed by mid-2018,” reads the report on implementation of measures reflected in the Strategic Road Map for Development of Logistics and Trade in Azerbaijan.

Baku port to complete first stage of construction until late 2017

The construction of the Baku International Sea Trade Port in Azerbaijan’s Alat settlement, which is expected to become one of the leading trade and logistics hubs of Eurasia, is gaining momentum. Director General of the Port Taleh Ziyadov told reporters that the first stage of construction of the Port is projected to be completed until late 2017. He mentioned that the completion of the first stage will allow the facility to handle nearly 1,280 tons of goods per day, while the implementation of all 3 phases of construction is projected to increase the capacity up to 7,660 tons on a daily basis. “The improvement program is currently underway on Ro-Ro terminals and terminals on the transshipment of dry freight. The work is also underway on the construction of moorings with a length of 650 meters. The second stage envisages construction of three additional moorings, while two new freight moorings will be constructed within the third stage,” he said. The completion of the first stage is expected to allow the facility to increase its capacity up to 11.5 million tons of cargo per year and to 50,000 containers, while the second stage will provide for the handling of 17 million tons of freight and 150,000 of containers. The implementation of the final stage is projected to increase the capacity up to 25 million tons of freight and 1 million of containers. http://www.hellenicshippingnews.com/baku-port-to-complete-first-stage-of-construction-until-late-2017/