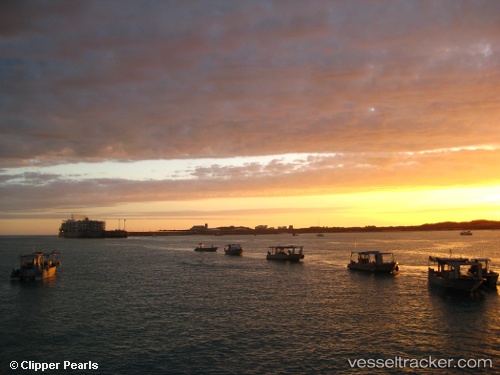 The ports of Port Hedland, Broome and Dampier are now open, following the all clear on the previous Tropical Cyclone alert. The port of Broome opened for shipping at 2100 hours local time yesterday (Monday 19 January). All Marine Operations will proceed as per amended bookings at COB today. The weather system no longer expected to reach cyclone intensity and is steadily tracking West of Broome. The Blue Alert has been cancelled for Broome/Kimberly.

In preparation for a possible tropical cyclone, Broome Port was closed to shipping at 1700 hours local time yesterday (18 January) and Port Hedland is considering port evacuation from today (19 January). A Tropical Low is currently over land in the northern Kimberley and is tracking south-westerly towards the coast. The system is forecast to move over open water on Monday and has the potential to develop into a Tropical Cyclone. The latest advice from the Burea of Meteorology is that current conditions are unfavourable for formation due to high level wind shear, however there remains a small window of opportunity for Tropical Cyclone formation on Monday. The Broome Harbour Master advises that only vessels on cyclone moorings are to remain in port and should immediately contact Broome Port on VHF 14 stating how many persons are on board. A further update will be issued at 0500 hours tomorrow on Monday.

Union workers are staging a sit-in on board a cargo vessel docked at Broome, to protest against an $8.5 million state budget cut. The Maritime Union of Australia say ship workers have begun the sit-in to protest against the removal of the subsidy to the service, which ships goods to the Western Australia's north. That has led to the cancellation of the service, with the final voyage taking place this week. MUA State Secretary Christy Cain said the cancellation of the service was bad news for many in the north-west. Advertisement "Without this shipping service, the price of almost everything in the north west will go up, because all these goods will now have to be put on trucks, and road freight is about 25 per cent more expensive," Mr Cain said. Read more: http://www.watoday.com.au/wa-news/budget-cuts-spark-broome-ship-sitin-20130819-2s771.html#ixzz2cQCmMQR2