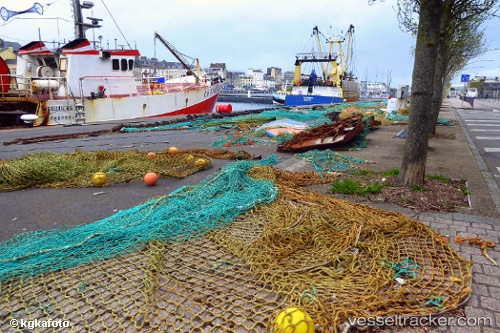 Irish Ferries will offer daily sailings to France when 55,000gt cruise ferry W.B. YEATS enters service in July 2018 with the 1,885-passenger/1,200-car newbuilding from FSG at Flensburg, Germany, departing Dublin for Cherbourg up to four times a week while the 1987-built OSCAR WILDE continues to link Rosslare with Cherbourg and Roscoff. https://www.shippax.com/en/news/daily-french-connections-for-irish-ferries-next-summer.aspx

The first phase of development works was launched in early 2013 and involved lengthening the Flamands quay by 320m to the south (including a 100m-long return quay) to provide a total length of 680m. This extension is intended to optimise the handling and frequent trans-shipment of heavy loads such as nacelles, masts or even foundations for offshore wind turbines. The extension of the quay will have a load-bearing capacity of 15 tonnes per square metre, i.e. two to three times that of conventional quays. This new berth will also make it possible to accommodate ships with a draught of up to 14m, enhancing the port’s capacity and its ability to cope with large vessels. The first phase of maritime works – consisting of dredging, excavation and the construction of the provisional dyke – has now been completed. Construction of the quay wall is starting in October 2013 and completion of the work is anticipated for the end of 2014. The second stage of this project is a €60 million extension of the harbour’s large-container yards, making new land available to enhance the attractiveness of the port of Cherbourg. With work due to start in 2014, the existing Flamands and Mielles ship yards will be extended by 96 acres to the North and East. The project is due for completion in 2016, at which point the port of Cherbourg will have almost 250 acres of land to dedicate to the MRE sector.