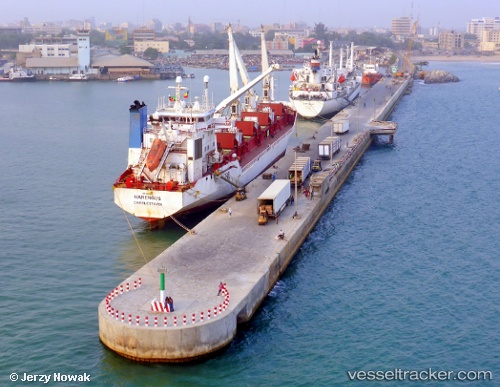 The consultancy and investment subsidiary of Antwerp Port Authority has been appointed by Ministers from Benin in West Africa to temporarily take control and modernise the port of Cotonou. Port of Antwerp International (PAI) is no stranger to modernisation work in the country having already carried out various consultancy tasks at the port during 2017. “We are delighted that the Benin government has opted for the expertise and knowhow of Antwerp,” said port alderman Marc Van Peel, who is also chairman of PAI. “With our subsidiaries APEC and PAI we have been working for a long time on the passing on and sharing of knowledge and experience in order to strengthen the worldwide network of our port.” http://www.portstrategy.com/news101/world/africa/port-of-antwerp-takes-charge-to-modernise-cotonou

APM Terminals Cotonou, operating as Coman SA at Benin’s primary port, adds two new cranes, the largest mobile cranes in the Benin port, the Group said Thursday in its press release. Cotonou, Benin- Coman SA, operated by APM Terminals Cotonou in Benin’s primary port, has commissioned two new Mobile Harbor Cranes (MHC) at a ceremony presided over by the Benin Minister of Transport, Hervé Hehomey. The new cranes will bring the terminal’s operating total to five, after the decommissioning of an older crane. The cranes have a lifting capacity of 144 tons, making them the largest in the port area.

As a common practice in the shipping industry worldwide and considering the challenging market environment with significant operational cost in Benin, CMA CGM anounced the implementation of a Terminal Handling Charge (THC) in Cotonou. As from August 15th, 2016, THC will be applicable in addition to the ocean freight for import and export cargo and payable at Cotonou as follows: Dry Containers: EUR 95 per 20' - EUR 135 per 40' Reefer Containers: EUR 140 per 20' - EUR 195 per 40' Special Containers: EUR 145 per 20' - EUR 205 per 40'