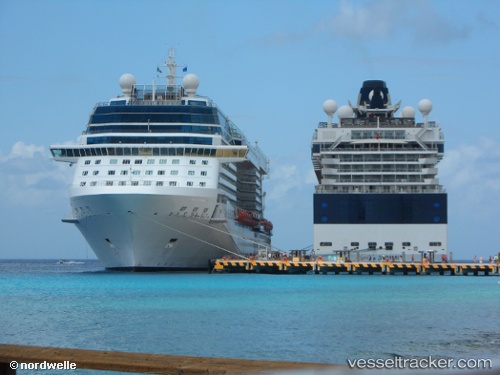 Carnival Corporation on Oct. 8 officially opened an expansion of its operations in Cozumel, Mexico, adding a third berth to the company's pier at Puerta Maya. With an investment of more than $20 million, the all-new "arm" was added to the company's existing pier to allow three ships to be moored at the terminal at the same time. To mark the occasion, three of the company's ships – Carnival Breeze, Carnival Freedom and Carnival Triumph – arrived today and became the first trio of ships to use the new three-berth pier. The pier will accommodate any ship across Carnival Corporation's 10 brands, including its next-generation ships. With 3.3 million cruise guests annually, Cozumel is the busiest cruise destination in the Caribbean. Carnival Corporation's extra capacity with the expanded pier will allow more ships to call on Cozumel, increasing the number of guests who can visit the destination while also providing a significant economic boost to the local economy. In 2014, about 1.5 million Carnival Corporation guests visited Puerta Maya on 25 different ships originating from eight homeports and two countries across six of the company's brands, and the company expects this to grow over the years with the added capacity at the port. http://www.cruiseindustrynews.com/cruise-news/13136.html

Cruise giant Carnival to invest over $150 mn in Mexican ports

Carnival Cruise Lines plans to invest more than $150 million to expand port infrastructure at destinations on Mexico's Pacific and Caribbean coasts, authorities said. Carnival representatives and Mexican officials signed an agreement on the Caribbean island of Cozumel at a ceremony attended by President Felipe Calderon and tourism industry officials, the Tourism Secretariat said. The company has invested $100 million so far in Mexico and is now planning the development of nine new projects, such as the construction of a cruise terminal in Cozumel and another in Baja California Sur state, Carnival Cruise Lines president and CEO Gerard Cahill said.Source : India Times