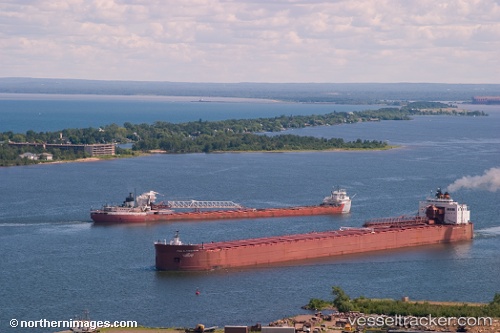 DULUTH, Minn.- The Erie Trader made it’s way out of the Duluth port heading to Two Harbors to load up on some iron ore. Spring is in the air but ice is still on the lakes, which didn’t stop the first boat of the season. The first shipping vessel of the season left the Twin Ports Tuesday afternoon. The sound of spring has arrived in Duluth as the shipping season kicks off. Seeing the first shipping boat make its way under the aerial lift bridge is a sight to see. Many people gathered near the lake, taking photographs, and enjoying the view. One couple FOX21 spoke with said they enjoy the lift bridge plenty, but make sure to never miss this. “It’s the first ship of the season, it’s just really cool,” onlookers John and Jean Kennedy said. “It’s a novelty of Duluth.” One family visiting Duluth tells us they were hoping to see a boat and just lucked out today. Now they plan to make it a tradition. “Well the ice the obstacles and the cold weather,” tourists Kubes family said. “It’s just something you don’t normally see.” The Erie Trader is the first of six winter vessels departing on Tuesday. Every year the Twin Ports Harbor has nearly 900 vessel visits.

Ships At Anchor Outside Harbor Waiting To Load

DULUTH, MN (KDAL) - The recent cold weather has slowed down the loading of taconite from area docks and has resulted in as many as nine ships anchored in Lake Superior outside the Duluth harbor. The ships are waiting their turn to load in the Twin Ports or Two Harbors and head down bound on the lakes before the Soo Locks close for the season on January 15th. According to CBS-3, officials have indicated the extreme cold can more than double loading times from the usual 8 to ten hours to as much as 24 hours. http://kdal610.com/news/articles/2018/jan/03/ships-at-anchor-outside-harbor-waiting-to-load/

Ship watchers who revel in the massive vessels that travel in and out of the Duluth/ Superior Harbor will soon see ship traffic slow to a halt. Shipping season on Lake Superior is nearly over, with the Soo Locks set to close Friday. This year, the lack of ice and iron ore, are making the biggest impacts according to Adele Yorde with the Duluth Seaway Port Authority. "People looking out in the harbor are starting to see the ice, which has really started to form in the last week," Yorde said. "These last lakers have made their last deliveries and they're heading home if you will." With winter layup just days away, significant ice cover is only in a few areas like the Duluth Harbor. The Coast Guard said ice coverage on the Great Lakes is only at six percent this year compared to about 25 percent the same time last year. Because of that, the Coast Guard sent out it's first ice cutter mission on the lakes on Wednesday, which is nearly a month later than last year. http://www.wdio.com/article/stories/S4016611.shtml