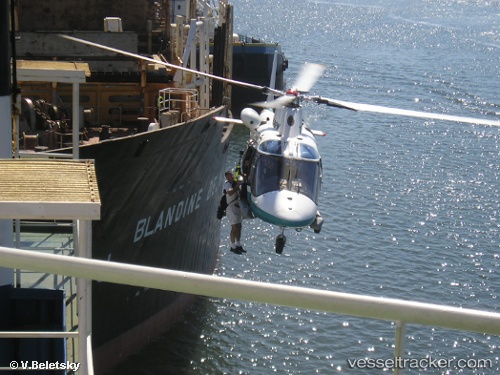 On May 3, 2020, at 10.15 a.m. the NSRI Durban launched the sea rescue craft 'Alick Rennie' to transport a ShipsMed doctor to a bulk carrier at the outer anchorage off-shore of the Port of Durban. The Port Health Authorities had arranged for the doctor to take sample swabs from a crewman onboard the ship, which is due to enter Port, for Covid-19 laboratory testing prior to the ship being granted permission to enter Port. Observing all Covid-19 Department of Health and Port Health Authority safety regulations and protocols on arrival at the ship the doctor was transferred onto the ship and sample swabs were collected from the crewman. The doctor returned to the sea rescue craft accompanied by the samples that he had collected and he was brought into Durban Port without incident. Port Health Authorities evaluated the samples to determine safe passage for the ship to enter Port. The operation completed at 11.40 a.m.

Hapag-Lloyd continues to develop its position in Africa and launches the new MIAX (Middle East-India-Africa Express) service – which will offer direct connections and fast transit times between South and West Africa, the Persian Gulf, India, Colombo (Sri Lanka) and La Réunion. Hapag-Lloyd has entered the African market about twelve years ago and has since then seen steady and significant growth in transported volumes to and from Africa."With the new MIAX service our customers will now benefit from an even wider range of fast and flexible direct connections," says Dheeraj Bhatia, Senior Managing Director of Hapag-Lloyd's Region Middle East.The MIAX service will be connected to the Global Mainline Network via the key ports of Jebel Ali (Dubai) and Colombo. Hapag-Lloyd will jointly operate the MIAX service with it's THE Alliance partner Ocean Network Express. A total of nine ships with a capacity of 2,800 TEU each, including five provided by Hapag-Lloyd, will be deployed for the new service.

The Port of Durban has been named Africa’s Leading Cruise Port at the World Travel Awards – and winning in two other categories, Leading City Destination and Leading Meetings and Conference Destination. Operated by Transnet National Ports Authority (TNPA), the Port of Durban came up against some stiff competition at the Africa & Indian Ocean gala awards in Mauritius on Saturday. Among the contenders for the award was Kenya’s Port of Mombasa, Tanzania’s Ports of Dar Es Salaam and Zanzibar, as well as South Africa’s Ports of Cape Town and Port Elizabeth. The Port of Durban previously held the title from 2010 to 2013 before losing it to Cape Town in 2014 and then to Mombasa from 2015 to 2017.