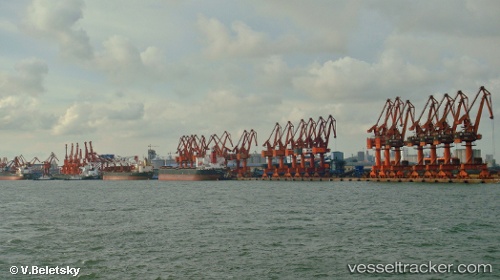 A ship loaded with fruit from ASEAN countries arrived at Fangchenggang Port Monday, marking a new shipping route for transporting fruit, local authorities said Wednesday. The shipping route from Vietnam's Ho Chi Minh to the port city of Fangchenggang in South China's Guangxi Zhuang autonomous region is operated by four ships from China COSCO Shipping Corporation. Each ship can carry 1,100 standard containers with a load of 1,800 metric tons. Currently the service runs once a week, but it is expected to run two to three times a week by the end of 2017, according to sources with the Beibu Gulf port administration. Fangchenggang Port is a fruit import port in southern China. The new route will help boost fruit imports from ASEAN countries, while marketing Chinese farm produce and fruit to the ASEAN. http://www.chinadaily.com.cn/business/2017-03/22/content_28642602.htm