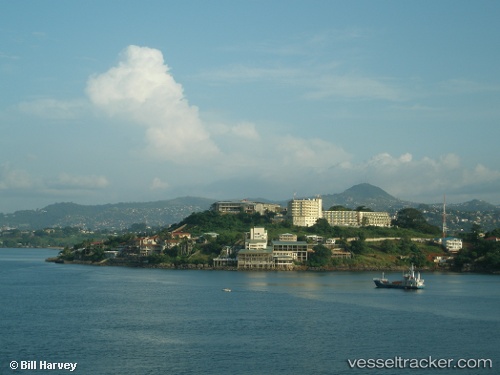 The Bolloré Group plans to spend $120 million to octuple the annual capacity of its container terminal in the port of Freetown, Sierra Leone, to 750,000 twenty-foot equivalents after volume rose 30 percent over the last four years. In addition to boosting annual capacity of the terminal from 90,000 TEUs, the three-year project is also aimed at increasing port productivity at the facility that handled 75,000 TEUs last year. The group, which has been managing the existing terminal since 2011, plans to build a 885-foot quay to accommodate vessels drawing up to 34 feet and a nine-acre storage yard equipped with ship-to-shore and other gantry cranes. The company has previously invested $37 million on rehabilitation work and new equipment. Bolloré’s announcement of more investment in Sierra Leone comes on the heels of APM Terminals’ announcement last week of its plan to boost terminal capacity in neighboring Liberia. APMT will double capacity at its facility in Monrovia, Liberia, as the global terminal expects volume there to increase nearly 30 percent this year compared to 2014. http://www.joc.com/port-news/terminal-operators/bollore-plans-octuple-freetown-terminal-capacity_20150921.html

The Skuld Association has been advised that the Government is planning to undertake a nation-wide curfew from 19 September to 21 September 2014 as part of a Ebola control exercise. The local office of Messrs. Budd has advised that during this period the nation’s ports will also be closed as everyone will be obliged to stay at home. The military will assist to enforce this curfew. As members will appreciate this is likely to significantly impact on any vessel that has already come alongside in Sierra Leone, and will also have a back log effect on vessels waiting to come in. During this period it may be that no port services will be available at all and vessels should prepare for such a 72 hour cessation of all services and facilities.

Sierra Leone (Reuters) - A fire on board a South Korean trawler fishing off the coast of Sierra Leone forced the crew to abandon ship, fleeing onto boats that came to their rescue, its captain told Reuters on Monday, Apr. 21. The fire on the 70-foot (21-meter) Osito 89 broke out in the engine room at 0400 GMT on Sunday about five nautical miles off the town of Kent, south of the Sierra Leonean capital Freetown. Thick smoke billowed from the vessel on Monday and flames rose from the hull, according to a Reuters witness. "The fire became wild as it spread into the captain's bridge so I had no alternative but to send an SOS to our company's office," Captain Seak Kim Che said.