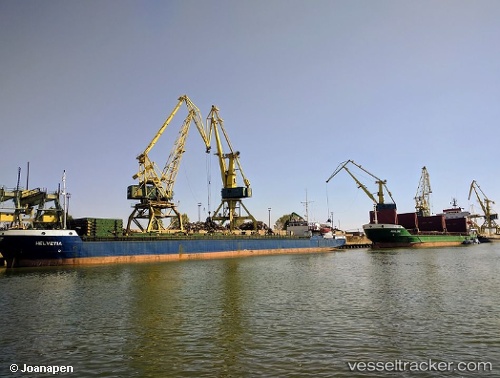 Australia’s new Antarctic icebreaker, RSV Nuyina, was floated in wet dock on Saturday at Damen Shipyards in Romania. It took two days to pump enough water from the nearby river into the docks, raising the water level six meters (20 feet) and floating the 10,751 ton ship about 30 centimeters above the dock floor. The ship is 25.6 meters (84 feet) wide and the dry dock is 35 meters (115 feet) wide. There’s about 10 meters (33 feet) of water in the wet dock, which will be enough to support the 16,000 ton weight of the ship when she’s completed.

The first project Romania submitted in the Connecting Europe Facility programme targets the construction of a container terminal in Galati, Eastern Romania. The project has a total value of EUR 140 million and will create some 8,000 jobs, according to the Romanian Minister of European Funds, Eugen Teodorovici, cited by local Agerpres. The session for submitting such projects opened in September 2014 and will end in February 2015. The project submitted by Romania will almost certainly obtain financing, added the minister. The project has an execution period of 36 months and is a partnership between Galati port, represented by the Maritime Danube Ports Administration (APDM) and private companies Port Bazinul Nou Galati, Metaltrade Galati and German Duisburg port. The terminal in Galati will ensure transport of goods on the Rhine-Danube-Asia route. Of the total budget for the project, 85% will be EU funds, while 15% represent local contribution. Source: Romania Insider