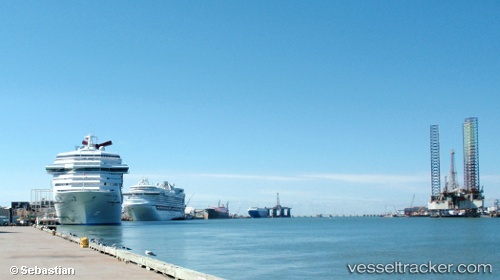 The US Coast Guard medevaced a crewmember from a 600-foot tanker at anchorage approximately 15 miles southeast of Galveston, Texas, on April 19, 2020. Coast Guard Sector Houston-Galveston watchstanders received a report of a 58-year-old man reportedly experiencing symptoms of an upper respiratory illness. Watchstanders consulted with the duty flight surgeon as well as local CDC and county health partners who recommended the medevac. Watchstanders launched a Coast Guard Station Galveston 45-foot Response Boat-Medium boat crew. The RB-M boat crew transferred the patient to awaiting emergency medical services personnel at Station Galveston who transported him to the University of Texas Medical Branch at Galveston.

HOUSTON / GALVESTON / FREEPORT While there are five ships set to sail, they are not in or above the restricted area beyond Morgan’s Point. Other reasons for ships not moving are that they are over the present draft restrictions or the required facility inspections need to take place. Movements will start shortly for any vessels that are not restricted by draft limits or that do not have to transit through a restricted area. Baytown is one of the places above the restricted areas and therefore ships cannot transit from or to facilities there. According to the pilots, the current is running at ten knots in the channel due to floodwaters moving to the sea. A total of 14 ships are in port and 24 are at anchorage awaiting inbound transit. Currents in the channel are of concern to pilots. They are watching conditions closely. Additionally, all terminals must have completed this post-storm assessment and must be inspected by USCG prior to receiving traffic. Source: Inchcape Shipping Services