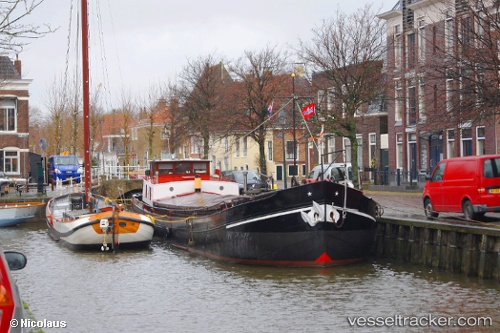 Fire in port of Harlingen

Zhe fire brigade of Harlingen was alerted on Aug 23, 2018, at 2 p.m. to a fire on the British fishing vessel newbuilding "Anna Lijdia" (no data available). Innsulation material had caught fire, and dense smoke emerged frimt the ship. Local residents had to keep doors and windows closed. The fire was difficult to combat because of the intense heat. Due to the enormous heat the hold was unreachable first. With a thermal camera, the fire department searched for the origin of the fire. But because the fire spread over the vessel, it remained difficult to localize the fire. Around 4 p.m. the fire brigade boarded the ship to extinguish the fire from inside. Because it flared up again, everyone had to leave the ship shortly afterwards. At 5 p.m. the smoke development has decreased again and fire fighting resumed. Most of the fire was in the bottom of the ship. The fire was still not under control three hours later. Only at 8.30 p.m. it was brought under control. About forty firefighters of six corps fight the fire. Six to eight men were simultaneously extinguishing on board, they changed every half hour. They were working with compressed air foam, which required little water and had a cooling capacity.An expert fromthe North Holland Safety Region and one of the Dutch Navy helped to bring the extinguishing work to a successful end. The cause of the fire was not yet clear. The "Anna Lijdia" was berthed at the jetty at the Damen Schipdock BV in the industry port. The ship's home port will be Lowestoft. The ship was launched in May in Harlingen and will be completed by TB Shipyards. Damen only facilitated the berth and was not involved in the construction itself. Dutch reports with photos and video: http://www.lc.nl/friesland/Brand-op-schip-in-haven-Harlingen-onder-controle-23477150.html https://franekercourant.nl/2018/08/23/fikse-brand-op-schip-in-harlinger-haven https://www.transport-online.nl/site/94514/grote-brand-op-schip-in-haven-van-harlingen-foto/ http://www.scannernet.nl/nieuws/actueel-nieuws-harlingen/brand-viskotter-shipdock-harlingen https://www.omropfryslan.nl/nieuws/835615-sein-brand-meester-gegeven-bij-schip-harlingen

Three German tourists have died after a ship's mast broke and fell on them in a northern Dutch port. Friesland provincial police said investigations are under way to establish exactly how the mast broke on Sunday while the ship was near the port town of Harlingen, 68 miles north of Amsterdam. SHARE The victims, whose identities were not immediately released, were part of a family group of 12 Germans on the ship. Harlingen mayor Roel Sluiter called the incident "a terribly tragic accident".

The Dutch 23-m-pilot boat "Reiger" was in allision with the Dutch windfarm support vessel newbuilding "Acta Orion" , 3999 gt (IMO: 9750268), in the afternoon of June 8, 2015, in the port of Harlingen. Despite the assistance of four tugs the 108-m-vessel was caught by a wind gust during mooring operations and was pushed against the pilot boat which was berthed at a pier in the new fishery port. The "Acta Orion" was coming from the Stocznia shipyard in Sczcecin to be fitted out at the CIG Shipbuilding. The bulbous bow hit the pilot boat at starboard side and caused considerable damage. Dutch report with photos: http://www.scannernet.nl/nieuws/actueel-nieuws-harlingen/1405-acta-orion-harlingen