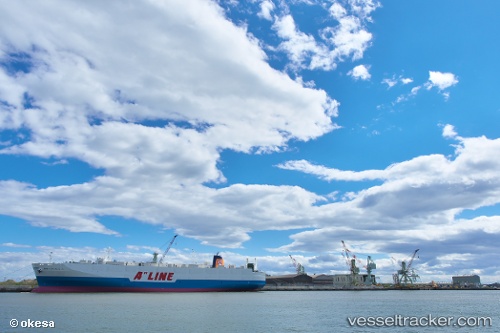 Never has a ship-launching ceremony been filled with more emotion than one that took place this Wednesday for Yamanashi Corp. based in Ishinomaki in Miyagi Prefecture. For not only did the ceremony mark the shipbuilder’s first vessel since the great tsunami of 2011, it also symbolized the port city rising from the wreckage of the disaster that devastated the region. Soon, the sacrifices paid off and a 695-ton training vessel was set afloat, to be used for fisheries high schools in Shimane Prefecture. The ship, whose design was proposed by high school students from Shimane, is painted in blue, green, and orange, to commemorate Iwate, Miyagi, and Fukushima, the three prefectures hit hardest by the tsunami, and also sported a brown stripe, the color used in the flag of the Shimane prefecture. http://japandailypress.com/first-ship-from-tsunami-stricken-miyagi-prefecture-launched-amid-recovery-2318868

NYK Global Bulk Corporation, an NYK Group company, held a get-together on board its 58,000-ton bulk carrier New Pride with guests from the Ishinomaki area in Miyagi prefecture to celebrate the installation of a new mechanical unloader (cargo handling machinery) at the port’s No. 7 Hiyori wharf and to pray for the further recovery and development of the port. Two of the port’s three unloaders toppled into the sea during the Great East Japan Earthquake and ensuing tsunami, and the port’s handling capacity had since been reduced significantly. The newly installed mechanical unloader can unload 400 tons per hour, about double the capacity of the old one, returning the port to its pre-quake capacity and helping revive the port and the surrounding area. http://www.seanews.com.tr/article/TURSHIP/PORTS/81841/celebrate--Devastated--Japan--News-by-topic--NYK--port--Quake--Reconstruction.-/