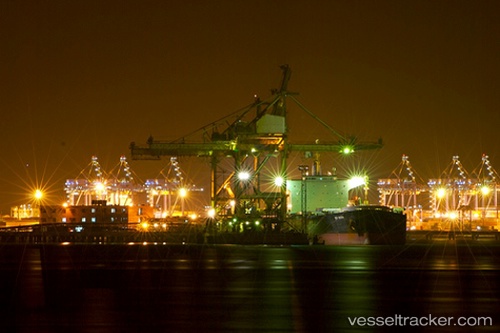 Pakistan gets its first ever remote-controlled cranes at Hutchison Ports

Hutchison Ports Pakistan received three new remote-controlled quay cranes to mark the beginning of the terminal’s second phase in Karachi. The development will make Pakistan the first country in the South Asia region to install semi-automated, cabin-less cranes. Pakistan’s first and only deep-water container port received the first installment of these high-tech cranes, under their agreement signed with Shanghai Zhenhua Heavy Industries Co. Ltd, China (ZPMC) recently, for the purchase of 8 new cabin-less remote-controlled quay cranes, and 24 remote-controlled rubber-tired gantry cranes (RTGCs). This incoming equipment will be the first of its kind in the country.

APL launches the India Pakistan-Mediterranean Express (IPM) Service – its first weekly service that directly connects India and Pakistan with the Mediterranean markets, the company said in its press release. “APL's new IPM service signifies another milestone in broadening our Indian Subcontinent (ISC) service offerings. APL customers in South Asia can expect to benefit from its direct shipping route and wide coverage of the Mediterranean ports. With its strategic port rotation that serves the major transhipment hubs of Malta, Damietta, Piraeus, Nhava Sheva and Mundra, shippers can tap on APL’s global network at these relay ports for further connectivity into vast key European, Asia and the U.S. East Coast markets,” said Eric Eng, APL Head of Asia-Europe Trade. Besides offering the fastest transit time from Mersin and Aliaga to the ISC markets, the IPM service also assures shippers an optimal handling of outbound cargo from India through a network of inland container depots located across the country before heading for the ports of Mundra and Nhava Sheva. The first sailing of the new IPM service will commence from the Port of Karachi, Pakistan, on 2 July 2017. The service will call the ports of Khor Fakkan, Karachi, Nhava Sheva, Mundra, Djibouti, Jeddah, Damietta, Piraeus, Malta, Aliaga, Mersin and Port Said West.

Country’s first deepwater container terminal to be ready by April

Pakistan’s first deep-water container terminal at the Karachi Port has entered the final phase of infrastructure development to welcome mother vessels by mid-April this year, say officials. Despite the significance attached to this terminal, sources say the KPT has been delaying their part of the project, which may not bode well with the investors who have a positive outlook of Pakistan’s ports – they are targeting to manage 20,000 TEU ships to serve as hub terminal for mother ships coming to Pakistan. Spread over 85 hectares, the terminal is designed to accommodate Super Post Panamax ships: large vessels having a capacity of up to 20,000 Twenty-Foot Equivalent Units (TEUs), an industry standard to measure a ship’s cargo carrying capacity. Placed on the mouth of Karachi Harbor, it has a depth of 16 meters and provides the most convenient access to mother ships entering Karachi. The project is a joint venture of Karachi Port Trust (KPT) and Hutchinson Port Holdings Limited (HPH), the Hong Kong-based parent of SAPT. http://www.pakistantoday.com.pk/2017/01/14/countrys-first-deepwater-container-terminal-to-be-ready-by-april/