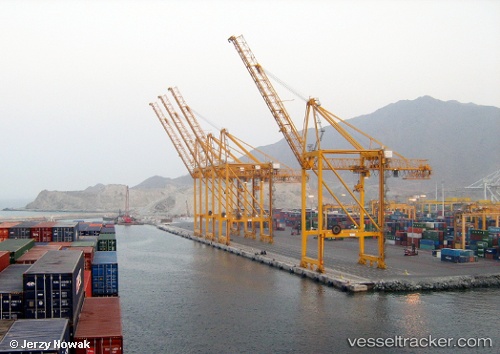 CMA CGM, a leading worldwide shipping group, has announced the launch starting July 2 of its new service between the East Mediterrane an, Djibouti, Arabian Gulf, Pakistan and India. The service is one of the fastest between these strategic zones and connects CMA CGM hubs in the Mediterranean and the Arabian Gulf, the company said in its press release. INDIAMED will complement MEGEM (East Mediterranean to/from Middle East) and MEDEX (West Mediterranean to/from Middle East & Indian Sub-Continent) offering synergies between services to allow an improved port coverage of these areas and better connections. Rotation will be: Khor Fakkan – Karachi – Nhava Sheva – Mundra – Djibouti – Jeddah – Damietta – Piraeus – Malta – Aliaga – Mersin – Port Said West – Khor Fakkan

UASC Sees Its Largest TEU Carrier Ever to Enter Port

UAE – Container shipping line United Arab Shipping Company (UASC) and Gulftainer, the privately-owned, independent port operator based in the UAE, marked the maiden call of UASC’s 15,000 TEU MV Linah into Khorfakkan Container Terminal (KCT), at an event yesterday. The ship is the largest UASC vessel to call at Khorfakkan Port to date, and is one of the ships built as part of UASC’s newbuilding programme costing over $2.3 billion and comprising 17 ships to be delivered between November 2014 and 2016, of which 11 are 15,000 TEU vessels and six are 18,800 TEU vessels. UASC is claiming its new fleet is world’s greenest due to the technology aboard giving the ships outstanding environmental credentials, and confirming the vessels were ranked among the best performing carriers based on CO2 emissions in a recent progress report by Business for Social Responsibility’s (BSR) Clean Cargo Working Group. http://www.handyshippingguide.com/shipping-news/container-shipping-line-sees-its-largest-teu-carrier-ever-to-enter-port_7093

Gulftainer has achieved another milestone at its Khorfakkan Container Terminal (KCT) with the completion of 4,073 container moves in a single 12-hour shift. This achievement has defied general industry belief that the 6,000 moves in a 24-hour period target for shipping lines since the inception of the mega-ship is not possible. The full operation consisted of an 8,288 container (13,005-teu) exchange, inclusive of 10-high deck stowage, on the port call of CMA-CGM Georg Forster, one of the French shipping line’s 18,000-teu capacity vessels. KCT terminal staff completed the operation in 36.4 hours, resulting in gross moves per hour (GMPH) of 227.7 and berth moves per hour (BMPH) of 223.4, allowing the vessel to sail for Yantian, China ahead of its pro-forma schedule with a total of 15,765-teu on board.