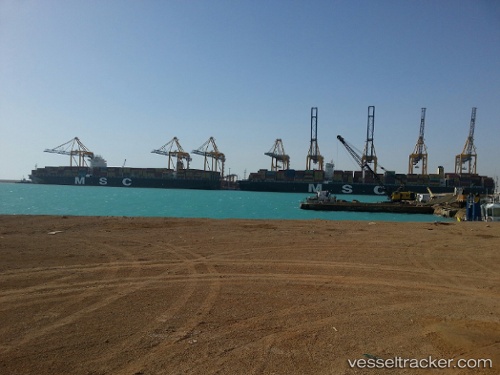 In the largest commercial operation of its kind in the history of Saudi Arabia, King Abdullah Port has received 28 state-of-the-art Liebherr cranes to start the expansion of the container terminals. The latter was decided through a MoU signed with National Container Terminal on the day the port was officially inaugurated in the presence of the Crown Prince Muhammad Bin Salman last February. The new cranes include 20 gantry cranes and 8 ship-to-shore (STS) cranes, which are the largest of their kind, with an outreach of 70 m (25 rows) and a safe working load of 65 t. The cranes that were supplied in this deal will join their operational counterparts in the port. They are the largest cranes exported by Liebherr and can serve mega container ships easily and seamlessly.

King Abdullah Port has signed a 25-year agreement with AMSteel to operate its first bulk and general cargo terminal berth. Management for the port, which is the first fully privately-owned, developed and operated commercial port in Saudi Arabia, said that it anticipates that operations at the terminal will begin in the second quarter of 2018. AMSteel’s warrant to operate the terminal lasts for 25 years, with King Abdullah Port’s first stage of bulk and general cargo terminals set to have a three million-tonne capacity.

0 November 2016 DUBAI — King Abdullah Port’s management expects to finalize the first phase of bulk cargo terminals with a capacity of three million tons, in addition to the RORO (roll-on/roll-off) terminals with a capacity of 300,000 CEU by the beginning of 2017. In a statement issued on the sidelines of Seatrade Maritime Middle East Exhibition at the Dubai World Trade Center, Eng. Abdullah Hameedadin, Managing Director of the Ports Development Company, owner and developer of King Abdullah Port, said that King Abdullah Port was able to significantly enhance its capabilities and is currently moving towards important achievements in terms of the project’s development in general and the operations taking place, referring to the increase of the annual throughput in King Abdullah Port, which reached 1.27 million TEU in 2015 and is expected to be surpassed by the end of this year despite the global trade slowdown. http://www.zawya.com/mena/en/business/story/Saudi_King_Abdullah_Port_bulk_cargo_terminal_operational_early_2017-ZAWYA20161110051433/