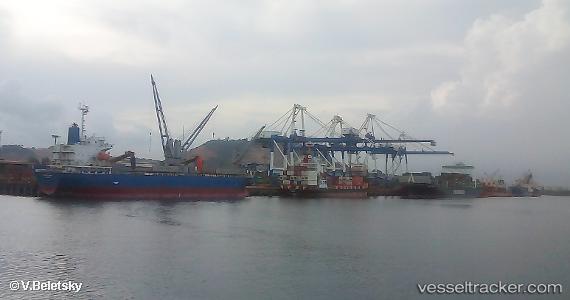 Some three million tonnes of bauxite will be sitting on Kuantan Port's land when a three-month mining ban kicks in on Jan 15. Kuantan Port Consortium general manager Datuk Azahari Muhammad Yusof said lorries were now bringing bauxite here at an average of 80,000 tonnes a day. "We have more or less 2.8 million tonnes of bauxite in Kuantan Port. We will have roughly three million tonnes by Jan 15," he told The Star. He added that this took into account the thousands of tonnes of bauxite being loaded onto ships every day. The Natural Resources and Environment Ministry announced the ban on Wednesday, adding it would be extended if miners did not manage mining and transport of the mineral well after that. Right now the port and 11 stockpile spots are being used to store the bauxite mined around Kuantan. - See more at: http://news.asiaone.com/news/malaysia/bauxite-build-kuantan-port#sthash.vF55TQXU.dpuf

Kuantan Port Consortium Sdn Bhd (KPC) yesterday refuted the allegation that the waters of Balok river and Batu Hitam Beach had turned red because of the extensive bauxite mining activities at its port. Its Chief Operations Officer, Khasbullah A Kadir, said KPC had a systematic water control and filter system to ensure water flowing into Sungai Penggorak and out to sea was not polluted with bauxite. “Three of our metal filters collapsed as they could not accommodate the outpouring of water following the heavy rain on December 28. “But at the same time, we still have the gabion/filter system which functions to filter all dirt from flowing into Sungai Penggorak. So, in this regard, it is not true whatsoever that the red water in Balok river and Batu Hitam beach was caused by the activity at the port. “This is because, Sungai Penggorak comes from a different water source and is located far from Balok river and the Batu Hitam beach, which were polluted in the incident,” he said when commenting on a report in a newspaper on the matter. http://www.freemalaysiatoday.com/category/nation/2016/01/05/kpc-refutes-red-sea-incident-caused-by-port/

China’s Guangxi Beibu Gulf International Port Group is taking a total of 40% stake in Kuantan Port Consortium for RM334.42m. Road Builder Holdings and Essmarine Terminal, two units of IJM Corp Bhd, are selling a 38% stake and 2% stake to Guangxi Beibu respectively. “There is no profit impact at the group level. However, the disposal would increase the reserves positively and enhance the group’s balance sheet,” the consortium said, adding that proceeds from the disposal would be used for port expansion and working capital of the group. IJM said its partnership with Guangxi Beibu would bring best practices of port management, and its network of clienteles would enhance the capacity utilisation of Kuantan Port. [seashipnews 10/09/13]