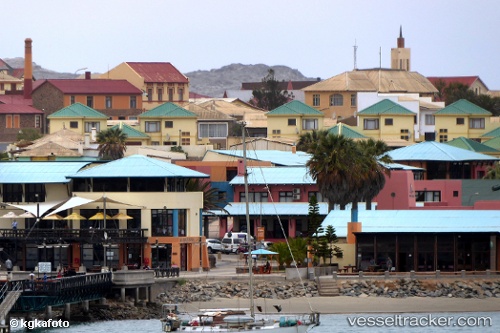 There is huge interest from mining companies at the Northern Cape in South Africa to export manganese via the port of Lüderitz. The manager at the port of Lüderitz, Max Kooper, alluded to this during a recent visit by The Namibian. Lüderitz facilitates the import and export of goods at the coastal town with future plans to extend and improve the current infrastructure of the port. According to Kooper, Lüderitz has a shallow port with a draught of 8,15 metres. Until recently, Lüderitz port was without a railway link. But that will soon be a thing of the past as Namport has embarked on rail infrastructure within the port, which is at the final stage of implementation. Kooper said, ‘the tender was already awarded and work has begun on the project. We anticipate to complete the rail inside the port by end of August this year.’

Namibia in Talks to Deepen Luderitz Port for Phosphate Shipments

Monday, 26 May 2014 | Namibia is in talks with private investors about deepening Luderitz port to handle vessels capable of shipping phosphate from marine desposits off the southern African country. “We are looking at developing it as a deep water port to handle larger vessels,” Namibia Ports Authority Chief Executive Officer Bisey Uirab said yesterday in an interview in Windhoek, the capital. “We are in discussions with some mining companies and the potential for phosphate mining makes economic sense for us to develop the port.” While the port’s 8.15-meter (26.7-foot) depth is limited by rock, larger vessels would require a draft of as deep as 18 meters, Uirab said, adding that it doesn’t make economic sense to transport goods from southern Namibia to Walvis Bay. Deepening Luderitz would allow Namibia’s second-biggest port to ship mineral exports from the south of the country and from South Africa’s Northern Cape province. It would cost “several billion” Namibian dollars, said Uirab. While Namibia imposed an 18-month moratorium on marine phosphate mining, pending an environmental study, the ban doesn’t include exploration, suggesting the government may allow mining from next year, the nation’s Chamber of Mines said yesterday.

Corridor Gas and Oil Terminal (Pty) Ltd says the ground-breaking ceremony for a liquefied petroleum gas (LPG) terminal at the port of Lüderitz should take place in January next year (2014). "This project involves bulk LPG storage with a working capacity of 3 000 metric tons and associated product handling systems," explained Leevi J Tshoopara, a director at Corridor.