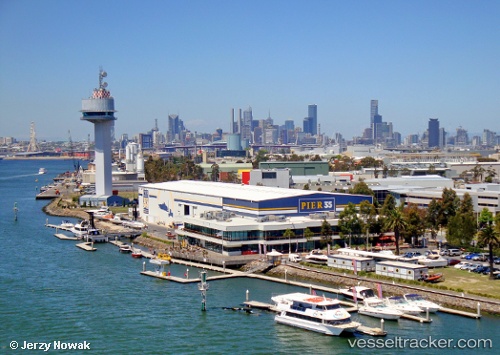 A 10-day workers dispute at the Port of Melbourne ratcheted up today with around 1,000 workers marching and blockading the Victoria International Container Terminal (VICT). The dispute between the Maritime Union of Australia (MUA) and VICT centers around a recent audit which revealed that 22 workers did not have a Maritime Security Identification card.

A bridge too far: warning bigger ships won't be able to reach Port of Melbourne

The next generation of bigger container ships bound for Australia will not be able to safely pass beneath the West Gate Bridge nor enter the Yarra River channel to reach the city's port, costing Melbourne valuable trade, industry warns. The warning follows the release of new data that shows Sydney overtook the Port of Melbourne as Australia's busiest last financial year. Shipping and transport groups say the Andrews government's failure to resolve looming constraints at the Port of Melbourne has put Victoria at risk of losing import and export trade to interstate ports and even to New Zealand, with negative consequences for the health of the state economy. Sydney's Port Botany has nudged ahead of the Port of Melbourne as the chief destination for container trade, handling 34 per cent of Australia's container movements in 2016-17. The Port of Melbourne handled 33 per cent, down from 36 per cent the year before, according to a report by the Australian Competition and Consumer Commission. The report on Australia's stevedores did not attribute Melbourne's declining share to larger ship sizes but said "the Port of Melbourne is the port most likely to limit the size of ships visiting Australia". Last month the biggest container ship ever to visit Australia, the Susan Maersk, docked at the Port of Brisbane. http://www.theage.com.au/victoria/a-bridge-too-far-warning-bigger-ships-wont-be-able-to-reach-port-of-melbourne-20171107-gzgjri.html