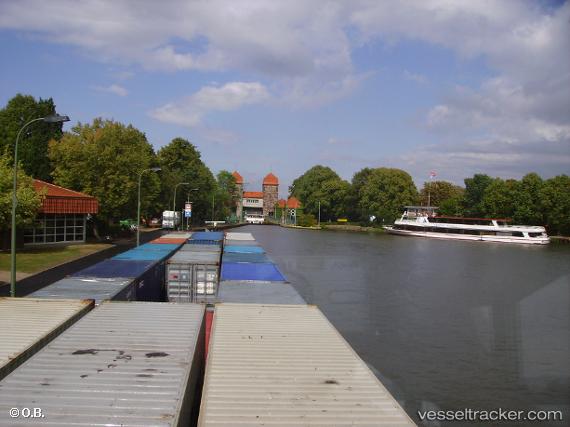 A giant new river lock which can handle modern river and canal motor ships up to 110m in length and will significantly improve European waterway transport, has been inaugurated on the River Weser near Minden in northern Germany. The new 139m long Weserschleuse Minden is located where the busy Mittelland Canal crosses the River Weser via an aqueduct, as it also does the River Elbe further east at Magdeburg. The 326 km Mittelland Canal , Germany’s principal east-west waterway, links Berlin in the east with the Rhine in the east, via the Dortmund Ems Canal and the industrial Ruhr. Its significance however goes far beyond Germany because it also links France, Switzerland and the Benelux countries with Poland, the Czech Republic and the Baltic Sea. Now, with the completion of the Weserschleuse Minden, another significant commercial link for modern waterway traffic has been created: between the canal and the Weser. The new lock can handle big modern inland motor ships of up to 110m in length and 11.45m wide drawing 2.5m. For the first time ships of this size can now sail on the Central Weser and this in turn means dramatically improved links between Bremen/ Bremerhaven – Germany’s second biggest universal seaport complex down the Weser on the North Sea – and the German and European hinterland canal and river network. http://www.maritimejournal.com/news101/marine-civils/port,-harbour-and-marine-construction/92-million-lock-opens-for-euro-traffic