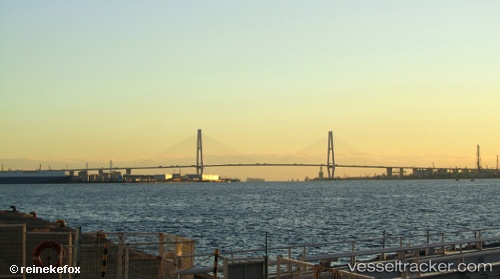 One dead in work accident

At the Yatomi Pier in the port of Nagoya an accident occurred aboard the Japanese cargo m/v 'Tensho Maru No. 1', 1600 dwt (IMO: 9105437), on Feb 3, 2020, at 8.30 a.m. while unloading 72 concrete slabs, in piles of 8 units each. Two workers were buried underneath one when the plate with a weight of 7 to 8 tons fell down after the ropes were untied. Firefighters were called, and cranes were used to rescue them. One of the workers, Keigo Niwa, 24, from Minato-ku, in Nagoya, was recovered dead after having been pressed in the abdominal region. The other, in his 30s, had suffered fractures in both legs. With the fall of the plate, the cargo ship was tilted about 30 degrees to starboard side. The Coast Guard was investigating the cause of the accident. Report with photo: https://www.portalmie.com/atualidade/noticias-do-japao/acidentes/2020/02/acidente-no-navio-cargueiro-em-aichi-mata-um-trabalhador/

From September 2012, Japan's port of Nagoya will be added to Rickmers-Linie’s round-the-world Pearl String Service schedule on a monthly basis, Baird Maritime reports. Shippers will be able to ship directly to Houston, New Orleans, Savannah, Philadelphia, Antwerp and Hamburg. The service also offers additional relay opportunities over Rickmers' hub port in Houston to other ports in the Caribbean and Central/South America. The upgraded service will employ nine Rickmers Hamburg-class vessels.